In Creole Food: America's Oldest Cuisine, Liz will explore why a cuisine developed in New Orleans and how it continues to evolve. The people of 3 continents that came together in early America - North America, Europe and Africa - came together in many places, bringing their foodways and culture into elbow-rubbing distance of each other. But in most places those 3 influences produced signature dishes of the area. In New Orleans those 3 influences forged a new cuisine. We will talk about why. 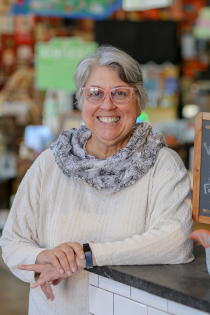 As the Founder of the National Food & Beverage Foundation (NatFAB), Elizabeth (Liz) Williams took an unconventional path to where she is today. Her forty-plus year career spans the professional gamut beginning with a BA in English and a JD from Louisiana State University. Aside from practicing law in Washington, D.C. and Louisiana for almost two decades, she has held a variety of teaching positions at notable institutions throughout the country – including the University of Maryland, Tulane University, and New York University – and has worked in a directorial capacity at a number of organizations like the Southern States Legal Center located in New Orleans, the University of New Orleans' Arts Administration Program; its Foundation; and Research and Technology Foundation. She has also served as a culinary diplomacy consultant for activities both nationally and internationally in Colombia, Russia, and France.
Long before beginning her distinguished career, Williams was inspired by her upbringing in New Orleans in a family of Sicilian descent. She grew up with an appreciation of cultural influences, having experienced cuisine that was derived from two strong culinary traditions. Fascinated by the way the lure of nutmeg and peppercorns motivated the exploration of the world, Williams became determined to integrate her love of food and history. At the time, she was amazed that the South did not have a museum dedicated to its extraordinary and unique gastronomic backgrounds. So, in 2004, after collecting numerous artifacts, planning exhibitions, recruiting nationally recognized chefs and food industry leaders to serve as the Board of Directors, Williams had assembled the resources and a team that lead to the development of the concept now known as the Southern Food and Beverage Museum (SoFAB).

Initially presented as a series of pop ups, SoFAB didn't have a brick and mortar location until 2008 when it opened its doors in the area known as Riverwalk; then in 2014 it moved to its current site in Central City, New Orleans. Since then, under her direction, it has celebrated the rich history of food and drink of the South via a variety of exhibitions and educational programming. The museum has received critical acclaim from across the globe including being named one of "11 of the World's Top Food Museums" by CNN and one of the "12 Best Museums Around the World" by Elle Décor. She also founded, under the NatFAB umbrella, the Museum of the American Cocktail (MOTAC) and the John & Bonnie Boyd Hospitality & Culinary Library in New Orleans as well as its affiliate museums, the Pacific Food & Beverage Museum and west coast arm of MOTAC, both located in Los Angeles. In Spring of 2019, Williams decided to pass the reins on to the new President/CEO Brent Rosen. Now under the official title of Founder, Williams has transitioned into more of an academic role that encompasses curatorial work for both the museum and foundation while continuing to concentrate on institutional growth.

As the author and contributor of over a dozen publications, much of Williams' research and writing centers on the legal and policy issues related to food and foodways. Among the titles, The Encyclopedia of Law and Food – coauthored with Stephanie Jane Carter (Greenwood Publishing, 2011); New Orleans: A Food Biography (AltaMira, 2013); Lift Your Spirits (LSU Press, 2016); and, most recently, Unique Eats and Eateries New Orleans (Reedy Press, 2019). In addition, she is a regular contributor to a number of national outlets including magazines, popular blogs and radio – her weekly podcast, Tip of the Tongue, explores the intersection of food and drink and culture. She frequently serves as a judge for food festivals throughout the U.S. and continues to consult on issues of nonprofit management and governance, as well as public/private partnerships, intellectual property and publishing.

For her Happy Hour's cocktail, Liz has selected a classic from New Orleans, The Sazerac.

Are You Using English Correctly: The Art of Rhetoric and Prose

Churchill and the Movie Mogul