The 2015 ESU Annual Conference, with the theme "General Washington Takes New York," took place October 10 - 12 at the Hilton Doubletree Metropolitan Hotel in midtown Manhattan.  Branch Presidents were specifically invited to a day-long Conclave with National Board Members that took place all day Saturday just prior to the formal opening for the Conference, and the Board of Directors met that day as well.

Organized by National Headquarters staff, the ESU National Conference comprised a series of meetings, lunches, dinners, receptions and tours over the Columbus Day weekend.  Members assembled on Saturday evening, after the morning Board meeting and afternoon Presidents Conclave, for a reception and opening dinner in the hotel's Chrysler Room, which boasted a dramatic cityspace view with the the Art Deco style Chrysler Building towering overhead. 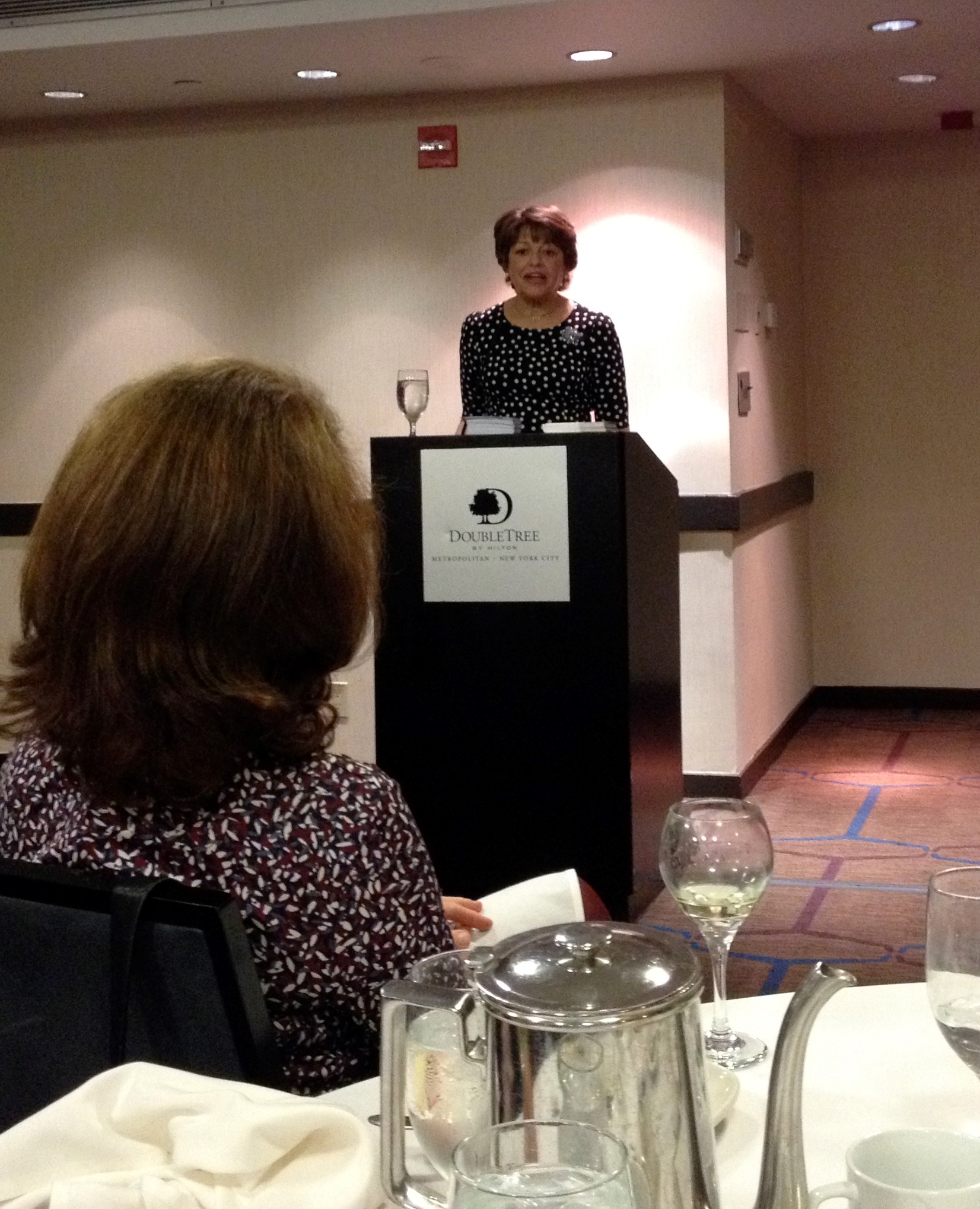 Prominent historical biographer, Flora Fraser, delivered the keynote address after dinner about her new biography The Washingtons, George and Martha: Join'd by Friendship, Crown'd by Love being published by Knopf later this year. 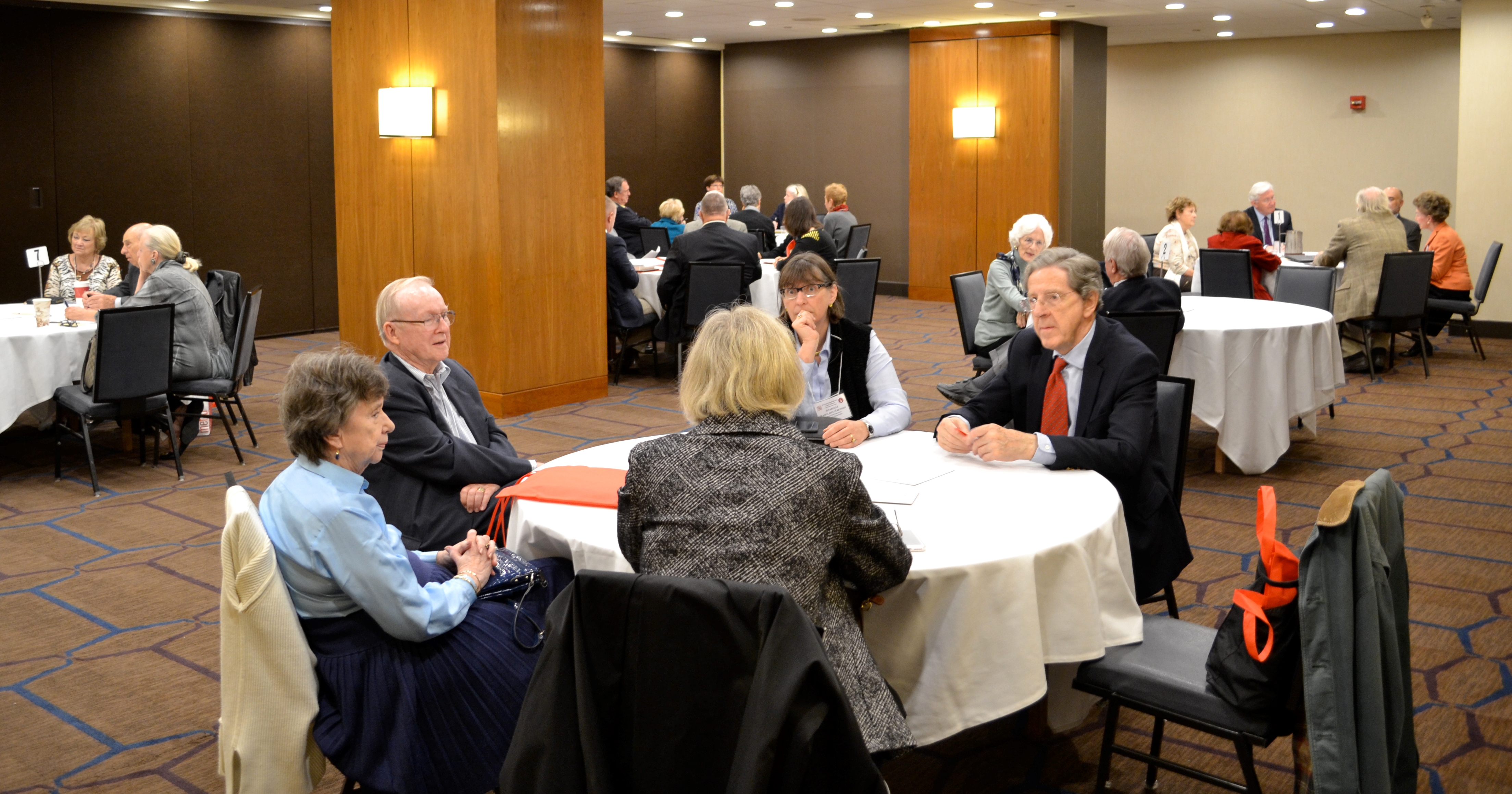 Sunday was a busy day, including regional meetings, a buffet luncheon with 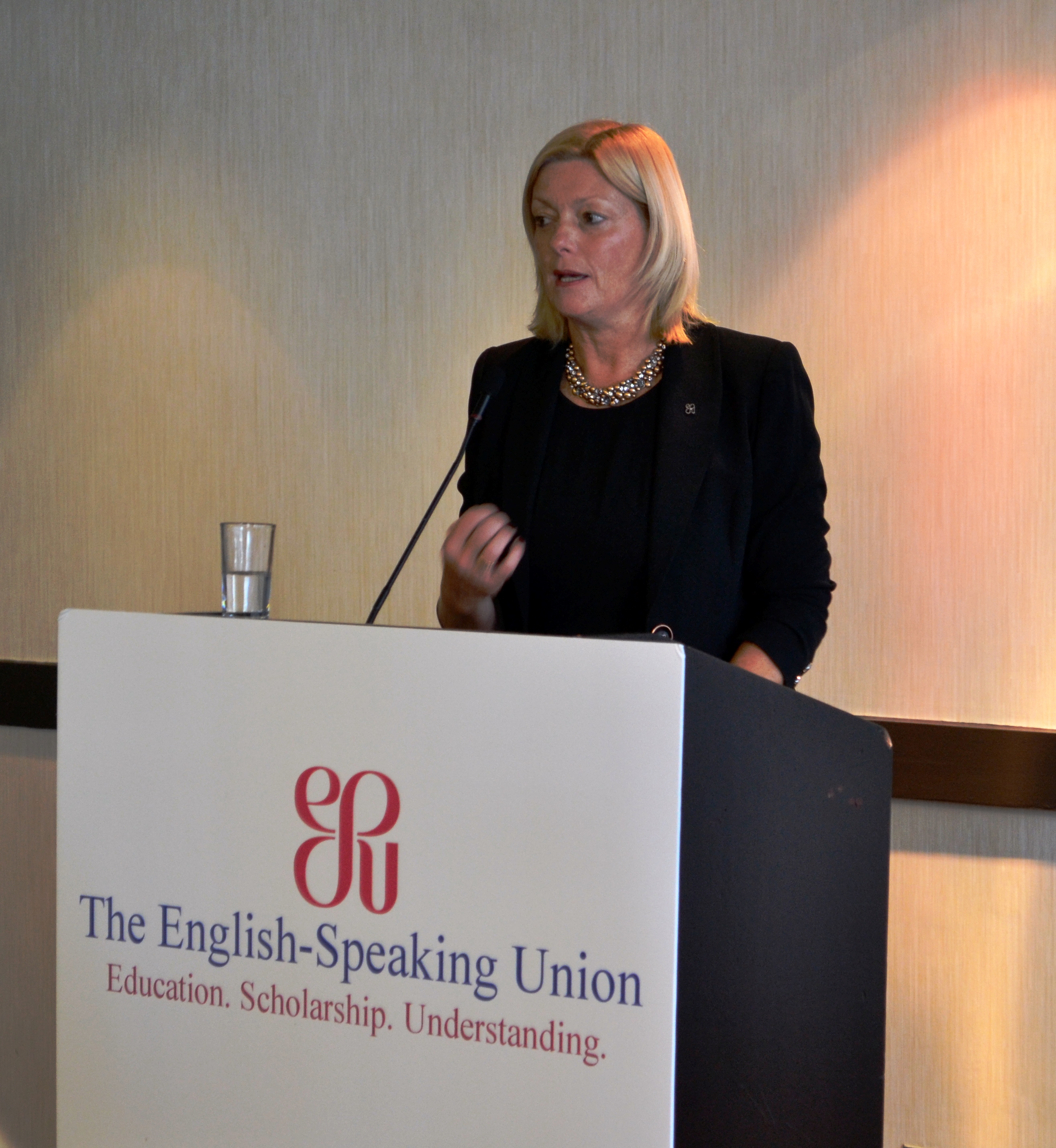 Director General of the English-Speaking Union of the Commonwealth, Jane Easton, providing remarks and offering a suggested new vision for the ESU under the rubric "Discover Your Voice," and the Annual General Meeting that showcased the ESU's educational programs and the

staffers that administer them. In the evening, National Patrons journeyed by motor coach to the historic Morris-Jumel Mansion, a house museum property of New York City's Historic House Trust, located in the Washington Heights section of Manhattan.  During the American Revolution, George Washington and his Patriot officers moved into the house, making it their headquarters for five weeks in the autumn of 1776.  It was a strategic location, because the house offered a great view of Manhattan and both the Hudson and Harlem Rivers, and the views of the glittering city from the porch of the mansion were beautiful. There National Patrons enjoyed a lavish reception co-sponsored by the New York Branch, as well as informative guided tours of the property lead by the museum's curatorial staff.

The conference concluded on Monday afternoon after a "bagel breakfast" sponsored by the New York Branch at National Headquarters that immediately preceded a walking tour of sites connected to George Washington in the Wall Street area of Manhattan. 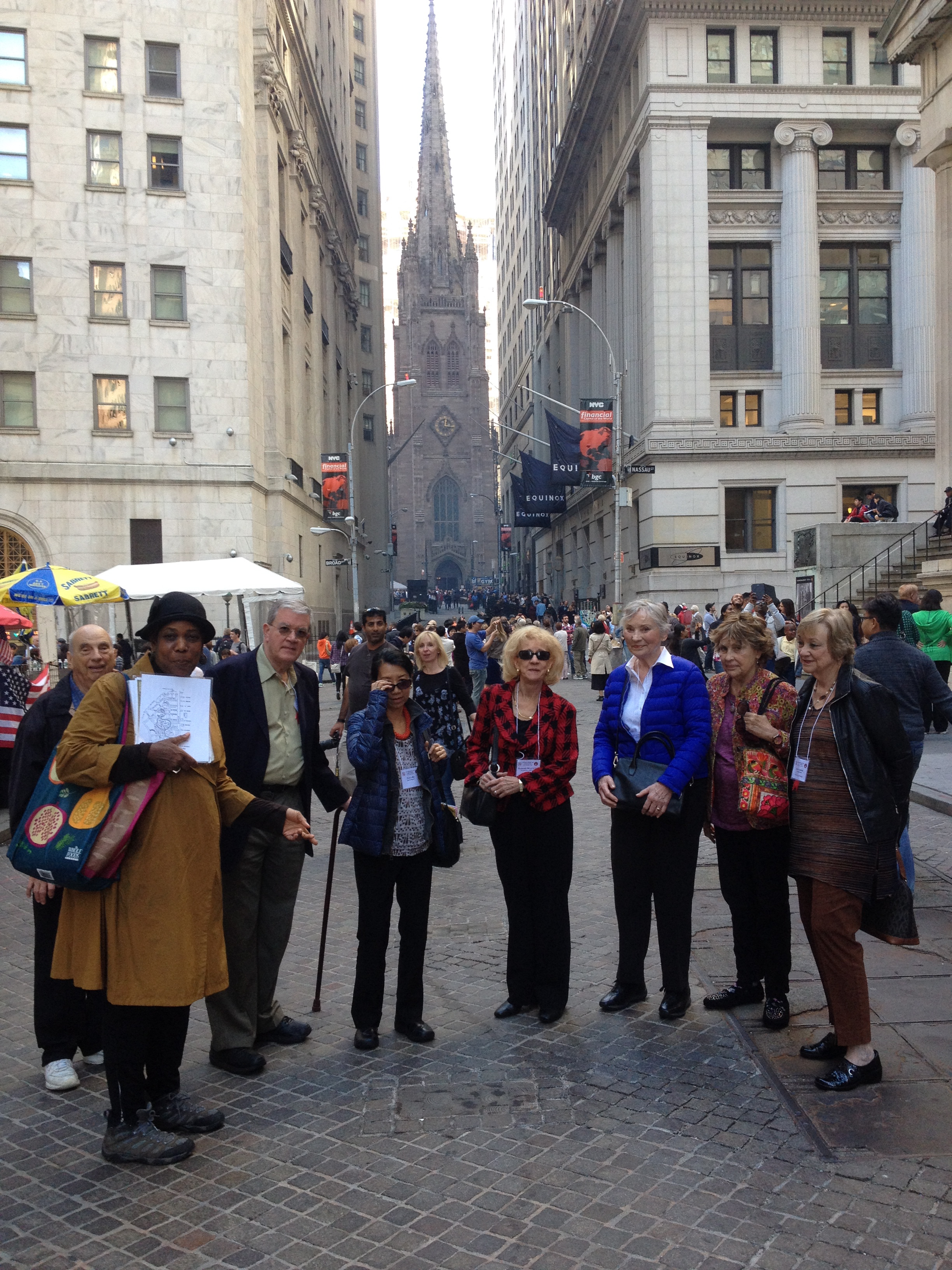 The meetings during the Annual Conference were substantive, informative and interactive.  The Branch Presidents and National Board Conclave provided focused discussion about the ESU's future, specifically about strategic planning currently underway as well as a proposed new governance structure for the Branches aimed at limiting liability.  Executive Director Christopher Broadwell conducted the meeting during which Elizabeth Watson, the consultant working with the ESU on strategic planning, made a presentation on her work to date.  Jeffrey Schnabel, Chair of the Branch Services Committee gave a detailed presentation on the new governance structure for the Branches approved by the Board of Directors at its meeting the day before.

New ESU Chairman Dr. Paul Beresford-Hill presided at the Annual General Meeting on Sunday afternoon.  ESU President E. Quinn Peeper reported on the Board Giving Campaign noting that the goal of $50,000 for the Campaign had been exceeded, even though a number of Board members had yet to participate as well as on the status of the National Patron Program.  As ESU Treasurer Hollister Sturges was unable to attend the meeting, he requested Director of Operations Grant Hamel to present the financial report in his stead.  The meeting also included illustrated presentations by Executive Director Christopher Broadwell and Deputy Director Edward Mohylowski who spoke about membership and ongoing development issues, including recent grants and the upcoming year-end appeal.  The major portion of the program given by Director of Educational Programs Carol Losos, who introduced the ESU Education Department Staff, each manager giving a brief presentation regarding the programs each shepherds. Joshua Keppel-Gonzalez, Branch Communications Coordinator, spoke about his work by and for the Branches.  Jeffrey Schnabel, Chair of the Branch Services Committee, made a detailed presentation on the branch/national governance structure approved by the Board of Directors, launching the information-sharing portion of its rollout.

The delegates at the Annual General Meeting also unanimously elected four new members to the Board of Directors:

Peter Frey is a private investor and a retired partner of TRG Management, an emerging markets asset management company where he was responsible for sales, marketing and product development from March 2003 until he retired in June 2007.  Prior to this he spent 17 years at JP Morgan, mostly in the Emerging Markets Group.  When he left JP Morgan Chase he was a Managing Director and Co-Head of U.S. Fixed Income Sales.  Mr. Frey is currently a trustee of the Louis Comfort Tiffany Foundation and a member of Vassar College's President's Advisory Council. In addition he is co-chair of the NYC chapter of J Street, a progressive pro-Israel organization. Until earlier this year Mr. Frey was a director and chairman of the Audit Committee of Chyron Corporation.  Mr. Frey is a former board member of the Lower East Side Tenement Museum and of Exit Art, a well-known alternative arts organization.  Mr. Frey grew up in Vienna, Austria, received a BA in Economics in 1982 from Vassar College and an MBA in International Finance in 1984 from The Wharton School.  He lives in Greenwich Village with his wife Carrie Shapiro.

Julia Hansen, Artistic Director Aspen Theater Masters, conceived, founded and administrated The Directors Project, a national training program for young directors whose alumni now include the head of the Yale School of Drama, James Bundy.  Ms. Hansen's new projects for Theater Masters include a publication of award winning plays, a collaboration with the Eugene O'Neill Theater Center for playwright director teams, an in school playwriting program for Ohio State University, and a new musical development program for the Maltz Theater in Jupiter, Fl.  In the theater arena she had served on the boards of The Acting Company, The American Academy of Dramatic Arts, The Society of Stage Directors and Choreographers Foundation, Lincoln Center Theatre and the Shakespeare Festival at Tulane.  Ms. Hansen began her career on Wall Street working for Prudential Bache and is a member of The Women Corporate Directors Association.  Her not for profit board service has included such diverse organizations as The Madeira School, The Calder Quartet, The Aspen Writers Foundation, and The Anderson Ranch.  She is a graduate of Vassar College.

Donna M. Miller belongs to a family tree that is rooted in pre-revolutionary Pennsylvania.  Mrs. Miller earned both her  bachelor's and master's degrees at the University of Florida and went on for doctorate work at Florida Atlantic University.  She began her career as a secondary English teacher, taught composition and literature at Orlando Junior College and was the writer, producer, and presenter for Miami-Dade County's Educational Television stations.  After the death of her husband, Mrs. Miller moved to Winter Park, FL with her young son and taught five years at Apopka High School.  She then became Curriculum Supervisor of Secondary English, Humanities, and Drama for Orange County Public Schools. She organized the 1994 National Council of Teachers of English National Conference in Orlando.  At Nova Southeastern University, she became part of the first distance learning graduate program using the internet.  Now retired, she serves as a consultant for a conglomerate of publishing companies.  Mrs. Miller is Past President of the ESU Central Florida Branch and  presently serves as Vice President for its Drey Endowment.  She stays happily busy in her retirement volunteer groups, including the Orlando Shakespeare Theater, and the Cornell Fine Arts and Morse Museums. 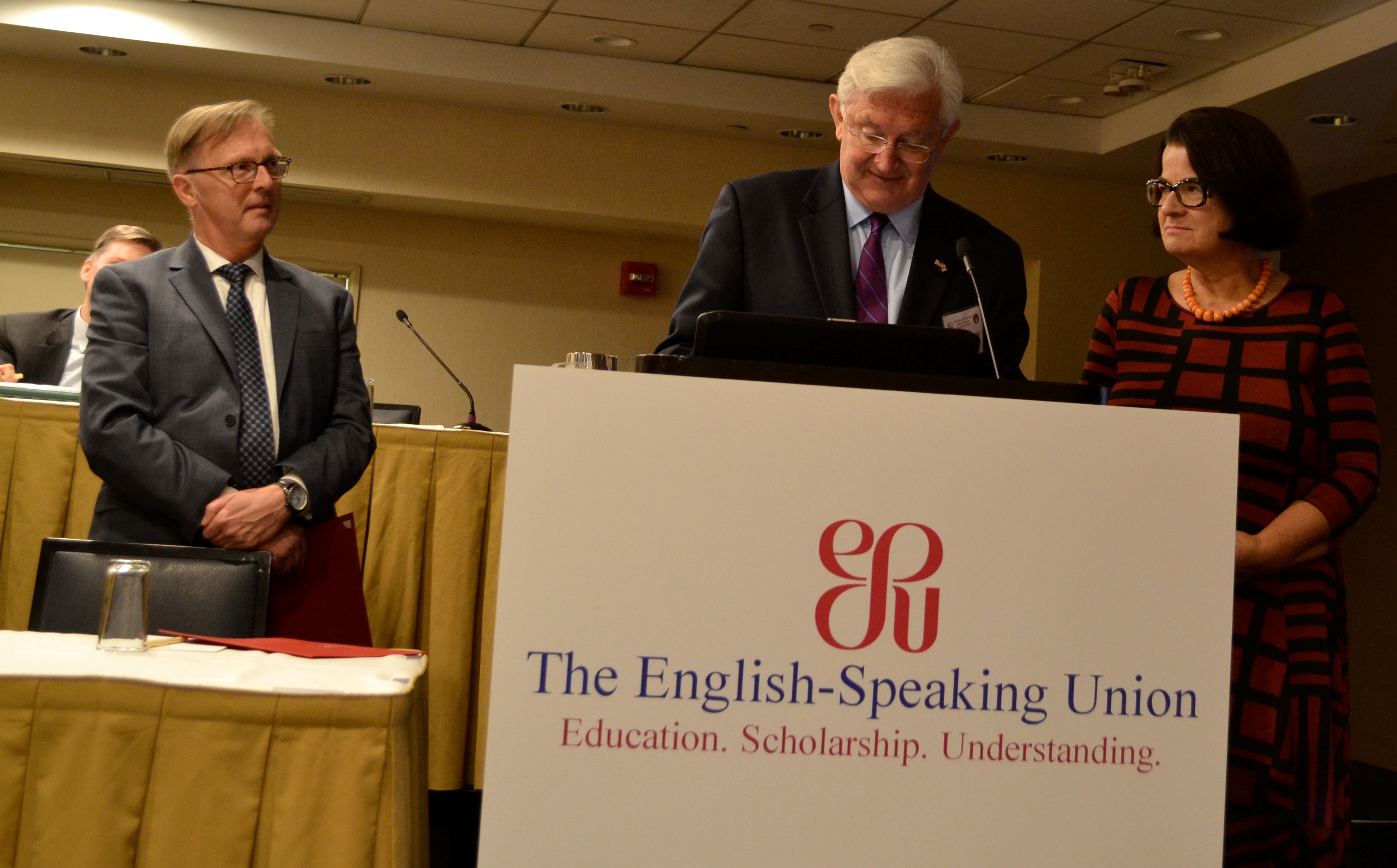 Prior to the conclusion of the meeting, Chairman Beresford-Hill announced the recipients of the annual Certificates of Merit, and those present came forward to accept their awards.

The Annual General Meeting concluded with an invitation to the ESU 2016 Annual Conference to be hosted by the Central Florida Branch in Winter Park October 14 - 16. The members at the AGM responded enthusiastically to the invitation.