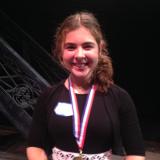 Congratulations to Miriam Arden who placed 1st in the Tucson Branch Shakespeare Competition held at the University of Arizona Tornabene Theatre.  Miriam, a junior from Catalina Foothills HS and taught by Carson Wright, dazzled the audience and judges with her monologue from Much Ado About Nothing. Miriam reminded us that Beatrice is a brilliant woman and a master of language.

2nd Place: Emma Nesbit from Flowing Wells HS and a student of Christopher Pankratz,portrayed Kate from The Taming of the Shrew, revealing that both she and Kate represent strong persuasive women who know how to use words.

3rd Place: Joey Misiaszek from Pusch Ridge Christian and a student of Kristé Johnson had us all laughing at Bottom and his dream. One of the judges said," It was fun to watch.  [He] found the show-off that Bottom is, as well as the enthusiasm that he constantly lives in."

The competition's guest speaker Daniel Kennedy has not let any grass grow underfoot since he won the Tucson Competition in 2001. He took third place in the National Shakespeare event in New York—the highest of any Tucson entrant so far. Moving on to Juilliard, he was the first student in that prestigious school's history to double-major in Drama and Vocal Arts. Then came a professional gig as Peter Cortland on the daytime series All My Children. After All My Children, Daniel interned for a year under The Commissioner of the Department of Cultural Affairs of New York City, the largest municipal funder of the arts in the United States. Then the State Department nominated him to be Fulbright Scholar to the University of Cambridge for a Master of Philosophy in Creativity. Next, Daniel won an international Fellowship to study Opera Direction at the Teatro Colón in Buenos Aires, Argentina. Daniel stated that his participation in the Shakespeare Competition gave him the confidence to apply for further study. We are thankful for his appearance as an inspirational speaker to our performers.