Congratulations 2017 TLab Scholars Kevin Hascher, from Berea Midpark High School, who will study at Shakespeare's Globe and Lisa Ortenzi of the Great Lakes Theater Company who will study at the University of Edinburgh.

Your Role in ESU

Your help will make a difference! And you'll have fun and make friends! Ask any Officer or Board member to learn more about these opportunities. Help is needed in all these areas!

We're a network of Branches. It was a pleasure to meet so many members from across the country who were interested in Cleveland and especially our Regional partners and strengthen good relations that our past officers had made.

Administratively, the Branches sought and were promised more collaboration in National board decisions. ESU is a large organization with many activities.

Summer/Winter Shakespeare. ESU-Cleveland's goal is to sustain interest in performing Shakespeare throughout the year as a stimulating way to develop literacy. The summer Festival complements the winter Shakespeare Competition. Between those events there are workshops for students and teachers.

The Festival presented "Romeo & Juliet" as theater-in-the-round at Acacia Reservation. Actors performed in front of, within and behind the audience keeping the audience stimulated. 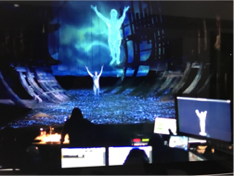 "Digital actors" - people, animals, monsters - are common in Hollywood movies. Now they are on stage at the Royal Shakespeare Company. In "The Tempest", human actors are on stage when a huge digital tidal wave crashes across stage, sinking a ship. It looks and sounds like the real thing. Then Ariel, a digital sprite, appears and manipulates the storyline while changing size and appearance from time to time.

Theater workshops at all levels of school are supplied by the Great Lakes Theater's Department of Educational Services. Four Shakespearean programs are offered in high schools.

Three of our Branch members were featured explaining the deep learning that the workshops provide.

History of the ESU

The English-Speaking Union of the United States was created to fulfill a mission.  It was formally organized in the United States in 1920 and arose from the conviction of its founder, Sir Evelyn Wrench and a group of like-minded American and British friends, that maintenance of the close personal and national ties forged during World War I was necessary for the preservation of peace. He imagined the ESU as an inclusive organization "founded in no narrow attitude of race pride, in no spirit of hostility to any people."  Its educational mission would be carried out by a host of activities allowing for personal contact between peoples at every level.

The Cleveland Branch was founded in 1923 under President John A. Penton of the Penton Publishing Co. The Branch disbanded at the end of World War II, to be re-activated in 1960 under the presidency of Dr. Harlan Hamilton, Professor of English at Western Reserve University (now CWRU)