Congratulations to 2017 TLab Scholar Ashley Honaker of Ragsdale High School who will study at the University of Oxford. 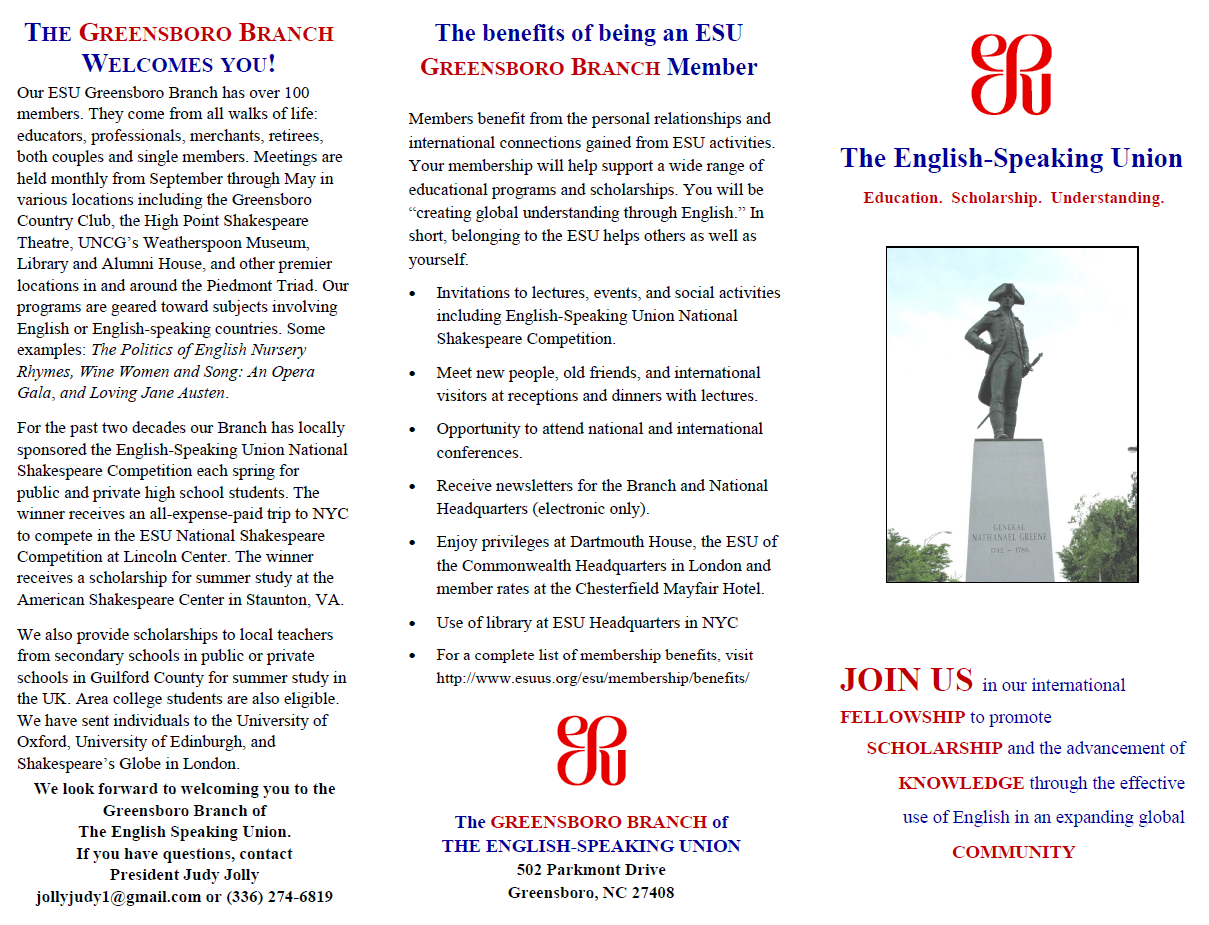 Our first event for the 2015 year was a dinner program on January 13th at the Greensboro Country CLub featuring Dr. Elliot Engel. Professor Engel's presentation showcased "The Inimitable Winston Churchill", who, despite experiencing a lifetime of personal failures and setbacks, persevered to become Prime Minister of England at age 62 with the outbreak of World War II. Perhaps Churchill had taken the advice of the outspoken Fritz Reiner who said, "Watch out for emergencies. They are your big chance."

Dr. Engel is an outstanding and engaging speaker and his presentation drew prolonged applause and many favorable comments. More than 70 people were in attendance despite the prediction of icy roads for the evening.

On November 16, 2014 the ESU Greensboro Branch welcomed as our luncheon program speaker, Francine Netter Roberson, author of the book, "Medicine's Michelangelo", a biography of her famous father, Dr. Frank Netter. Frank Netter was a doctor and an author whose award-winning "Atlas of Human Anatomy" remains today the best-selling illustrated anatomy atlas in the English language. Frank Netter worked with the medical giants of his day illustrating the first open-heart surgical operations and the first organ transplants. CIBA Pharmaceutical Company and its successor CIBA-GEIGY (now Novartis) sponsored his drawings for over 50 years. Francine's mother, also a medical doctor, grew up in Greensboro. Francine is President of the ESU Research Triangle Branch.

The Crossing of the Dan

The Greensboro Branch ESU collaborated with local chapters of Sons of the American Revolution, to host "An Evening with Dr. Henry P. Williams, III (Phil), presenting "The Crossing of the Dan." The program began with Dr. Williams setting the stage for the confrontation at the Dan River between Charles, Lord Cornwallis, and General Nathanael Greene, followed by the showing of a 21 minute professional documentary showcasing Greene as a masterful military strategist snatching "victory from the jaws of retreat." Dr. Williams, resplendent in an authentic reproduction uniform of his ancestor's regiment, delighted the crowd with his wit and humor. Phil is a member and past Viginia State President of the Sons of the American Revolution and an ESUUS National Board member.

September 11, 2014
A Gala Evening of Theater and Music with O'Henry
Greensboro Historical Museum

The Greensboro Branch of the English Speaking Union joined with the Greensboro Historical Museum to celebrate the 152nd birthday of wrinter and native son, William Sydney Porter (O'Henry) on September 11, 2014. A cocktail buffet in the Lobby Reception Gallery of the Museum was enjoyed by a capacity crowd. After dinner, guests assembled in the Mary Noris Preyer Hall to enjoy live performances of 5 of O'Henry's short stories. The delicious pre-performance buffet was a delightful prelude to the sold-out (SRO) production which kept us laughing and "glued to our seats" for the surprise endings. Guests also enjoyed vintage music by local performers during the evening.