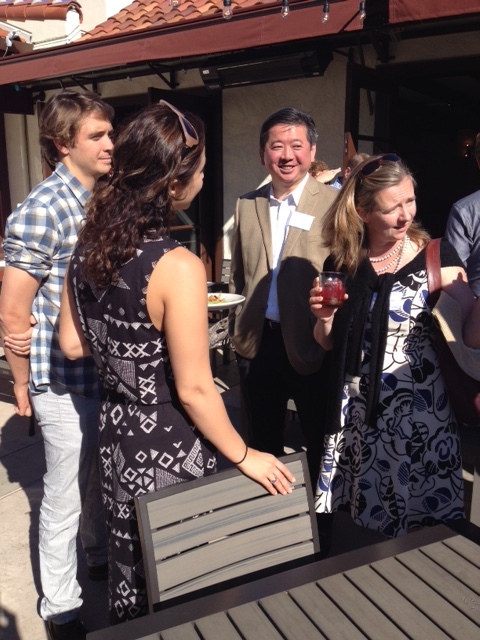 The San Francisco Branch recently hosted a reception to inaugurate the Graduate Scholars Association – a focal point for those who have received scholarships to study abroad from the San Francisco branch of the English-Speaking Union.

Probably about 120 scholarships were given. We have found information on over 80, and contacted about 55. They are scattered around the world. This is a work in progress. We would be delighted hear from, or about, any of our Graduate Scholars. Please send information to eileenmacmillan@comcast.net

Among the many distinguished recipients we found -

Roy Woodall, Scholar 1955-56, a geologist whose entry in the Encyclopedia of Australia Science occupies several pages.

Nancy Baigent, Scholar 1957-58, first woman to receive a degree in horticulture from the University of New Zealand, and probably the first in the southern hemisphere!   Ms Baigent worked in California for many years.

Jonathan Levin, Scholar 1993-94, son of Richard Levin above, now Holbrook Working Professor of Price Theory and Chair of the Economics Department at Stanford. He was awarded the 2011 John Bates Clark Medal.

Twelve Graduate Scholars attended the reception, along with their partners, board members, National Patrons, Stanford professors who serve as members of the Selection Committee and other friends of the ESU.

The Graduate Scholars Association is the brain-child of Nishant Bashta, Graduate Scholar 2010-11. Nishant intends to organize meetings, initially in the San Francisco Bay Area and later elsewhere. If you are a former Graduate Scholar and would like to be involved please contact Nishant at n.bashta@columbia.edu.