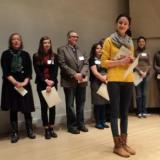 Last month our branch hosted our 27th Annual Shakespeare Competition at the Frye Art Museum. We had a great group of students that participated this year. Besides having high schools from around the Seattle area, we had Oak Harbor High School participate for the first time!!

The winners this year are as follows:

See photos of the event in the photos section. We want to congratulate all of the participants for such wonderful performances.

Good to know that we now have two Seattle branch members on the ESU National Board. William Maschmeier and Loveday Conquest represent the very best in terms of service to both our branch and the national organization. We are fortunate to have both of them on our local board as well. Thank you for your many efforts.

The PAFE arts education annual music festival has named their outstanding opera singer scholarship vocal award in honor of Richard Engstrom, as a lifetime honor, in recognition of his over 40 years in voice and opera. He studied voice for 14 years and after a brief vocal career became twice Vice-President of Education and Communications for the Seattle Opera Guild, the last President of the Seattle Minded Arts Supporters in Harmony and co-founder of the "Washington State Community Theater Association and also a past' President of Washington Association of Theater Artists. Additionally, for 12 years he has cast opera singers internationally and produced and coordinated for opera companies and has performed in 7 Shakespeare productions with two seasons at Ashland and was a judge for the Utah Shakespeare Festival in the summer of 2003 in St. George, Utah.

The PAFE Board honored him at their February 11, 2014, Executive Board Meeting and the lifetime voice award will be given out every May.

All members of the Seattle Branch can be proud of the Planning Committee's year-long efforts to host an outstanding national conference. The Washington Athletic Club was just the right size for the number of attendees; the newly remodeled facilities, the Crystal room especially shone on our main speaker events.

Eleanor Monroe, who has served as Chairperson for our English—in-Action program for many years, is asking for a few more tutors for her group. You can reach Eleanor at (206) 542-4639 to learn more about the program. The Seattle group meets weekly in a centrally located church during the daytime. Not only would you help orient some of our foreign visitors but sometimes you are in for a delightful culinary treat or a visit to a home. You will learn as much if not more than your student in many cases.

Many thanks to ELi Kirkpatrick for opening her lovely home for our traditional January lunch to bring in the New Year. Eli, as most you know, suffered a severe back injury and yet she remains the gracious hostess for so many of our functions.

A big thank you for Susan Wilson who prepared the quiche, fruit salad and baked ham. Many thanks to Bill Maschmeier for the zillions of curried sandwiches and to Jerry and Sarah Rockhold for carving ham, baking tons of tiny muffins and helping with the ever present cleanup. Sarah is the best sous chef that ever existed. She is the greatest at moving folks from the kitchen when cleanup is underway!

Receptions Past and Future

July found many of us at the home of Eli Kirkpatrick. We had a few sprinkles but promptly at 5 o'clock the sun shone brightly. Thanks to Jerry and Sarah Rockhold for holding down the beverage department. Thanks to that excellent sandwich maker, James Kemp-Slaughter as well as Pat Wilson, Susan Wilson, Ingeborg Dunlap, and Anne Passantino, who served up July picnic style buffet fare. Cheers, too, go to Alison Ellison for all she does every month to make the monthly receptions go so well.

Did you know that Seattle's English-in-Action program is advertised on a website in South Korea? Apparently, a Korean website, Washington Visiting Scholars, contains a blog with information about our English-in-Action program, including our location (University Lutheran. Church) and when we meet. This is how "Scarlett" (her American nickname) found us on Valentine's Day.  Our fearless leader, Marlene Holbrook, provided red roses and Valentine's Day treats, plus some spicy but very tasty Korean dishes. Part of our program that day was to go over interesting signs at a South African gas station that posts humorous or "food for thought" sayings every day. Some of these contain a pun or a joke, and the students gain insight into the workings of English. We had six students that day and four tutors: Marlene, Sarah Hemphill Lisa MacHogan and myself. In addition to helping our students get more comfortable with their English, we're also helping them get acquainted with "life in the Puget Sound area," like how to use Sound Transit's Light Rail System. Stop by at a session (Tuesdays at 11 am) and see for yourself?

We need reception venues for October and November.  Any volunteers? Please call or email Susan Wilson.

REPORT FROM THE BRANCH NOMINATING COMMITTEE

Our committee met last month for our first meeting of the year. If you have any suggestions for Board officers or members, please contact me in writing, and I'll pass information on to the other committee members. Be sure to have permission from anyone you are suggesting for committee consideration. The best Board members are those who have worked with our various committees and have an understanding of our organization and its mission.