Visit our photo gallery for our previous events.

Check out our latest news and events as well as our archive.

A Message from the Syracuse Branch President

Established in 1948, The Syracuse Branch of the English-Speaking Union is a very active group. Our programs reflect our members who are spirited, thoughtful and concerned about intercultural and international communications. They share a genuine interest in people and community affairs. The Syracuse Branch meets the second Saturday of each month - September through May - at a private club.

"Wonderful" was the word used to describe Gareth Fisher's talk at the Syracuse Branch's November luncheon meeting, especially among those who had visited or even lived in China for some time.

Fisher was introduced to the attendees by member Dorianne Parker.

Fisher, an Associate Professor in the Religion Department at Syracuse University, has closely tracked the growing interest in Buddhism since the repressive Communist regime which has made it the largest officially recognized religion in China today.

Fisher's audience obviously appreciated his firsthand reporting of practices in China today, those officially allowed as well as those conducted by lay practitioners without the State's sanction.

In response to questions, Fisher also updated the situation in Tibet, especially for those who had met the Dalai Lama.

Fisher co-edited "Buddhism After Mao: Negotiations, Continuities and Reinventions" and is currently working on another book. 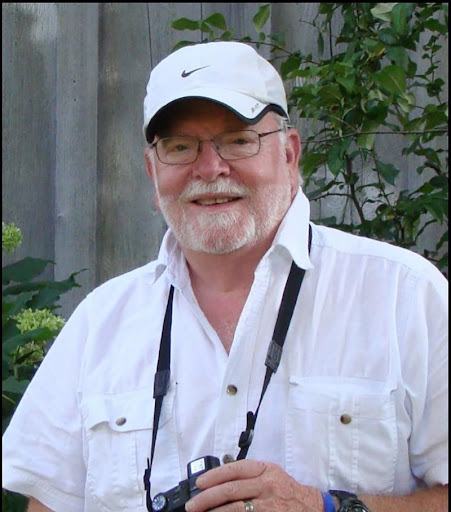 The Syracuse chapter of the English-Speaking Union has enjoyed dynamic speakers and each others' company this fall.  The September meeting featured Rick Bunting, known as the "Roadside Naturalist."  He enjoys sharing his love of nature (especially birds) through his photography and lectures.

Prior to showing us all how to follow our passions in retirement years, Rick served at the Chair of Music Education at the Crane School of Music at SUNY Potsdam and served as the conductor of the Crane Chorus.

In October we were pleased to have a presentation by Ryan Novak, the developer of the Chocolate Pizza Company in Marcellus, New York.  Ryan graduated from Syracuse University, where he was the place kicker on the football team.  He earned a degree in business studies at the Whitman School of Management. He began working at the small local store at age 15.

His strong work ethic and winning personality led to his purchase of the store at age 25, turning it into to an international company. Pizza and Wings are two of the 100+ chocolate products available from the company. He is pictured here with E-SU member Norma Ferguson.

The Syracuse Branch of the English-Speaking Union finished its 2021-2022 season with the pleasure of hosting Evelyn Wrench speaker James Stebbings, introduced by chapter president Carl Borning. 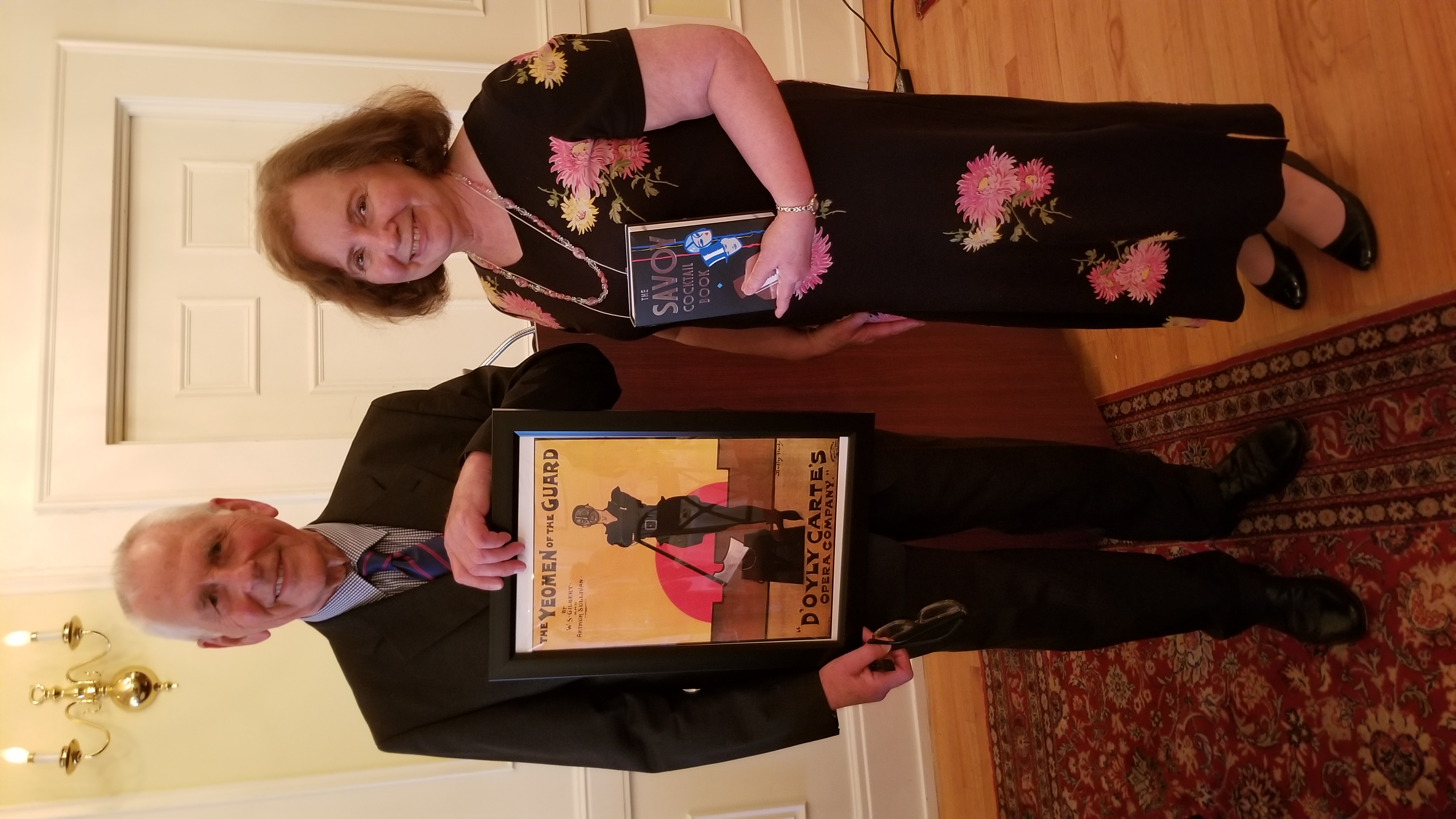 James Stebbings with Alice Borning May

Mr. Stebbings spoke on Richard D'Oyly Carte, a theater icon in the late 19th century who established theaters and an opera house in London and was instrumental, along with his family, in promoting the careers of Gilbert and Sullivan. Mr. Stebbing's presentation, "A Very English Dynasty," was informative and entertaining. 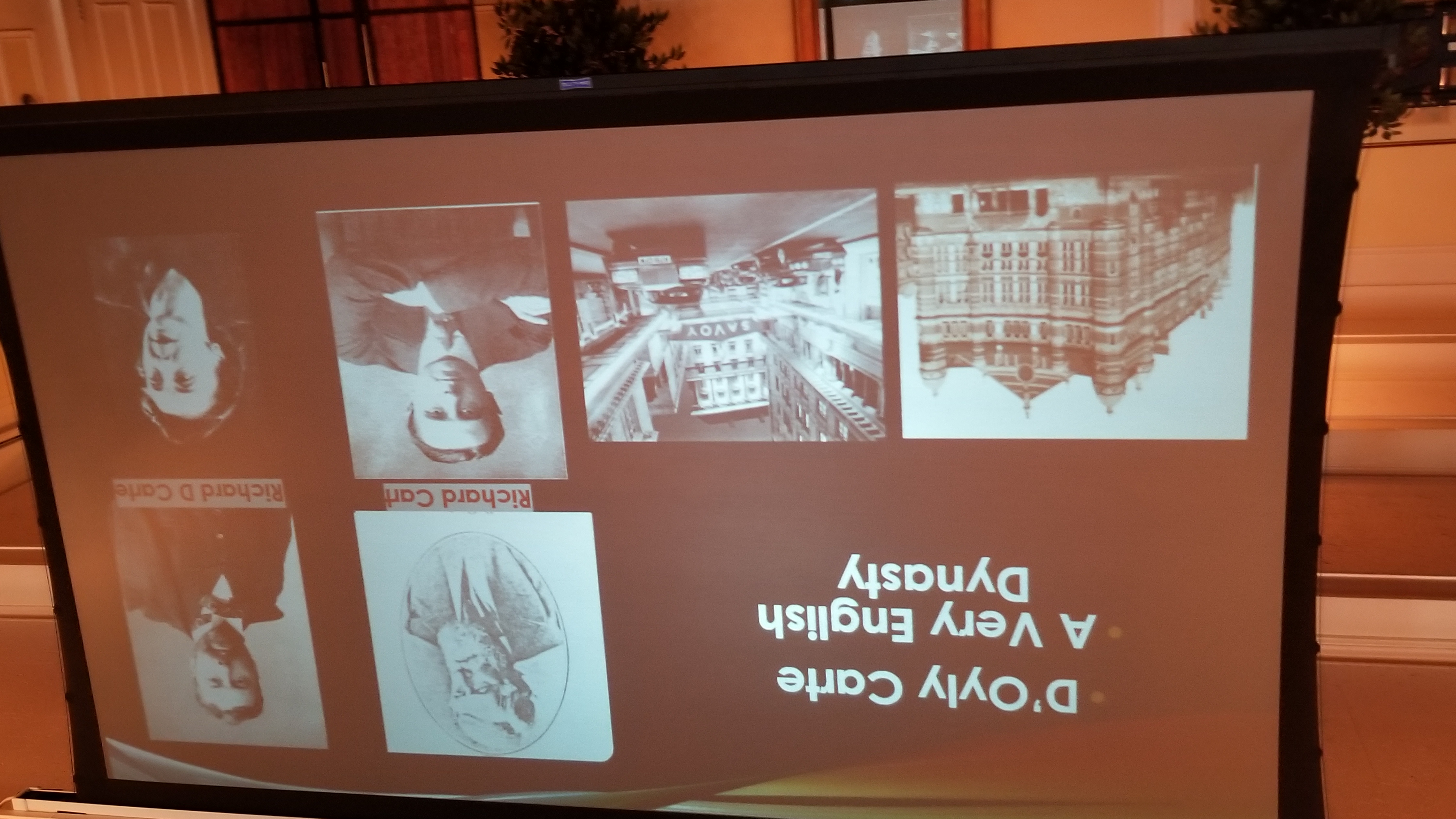 Previous to the May meeting, the ESU Syracuse Chapter met regularly this winter and spring with several excellent presentations. 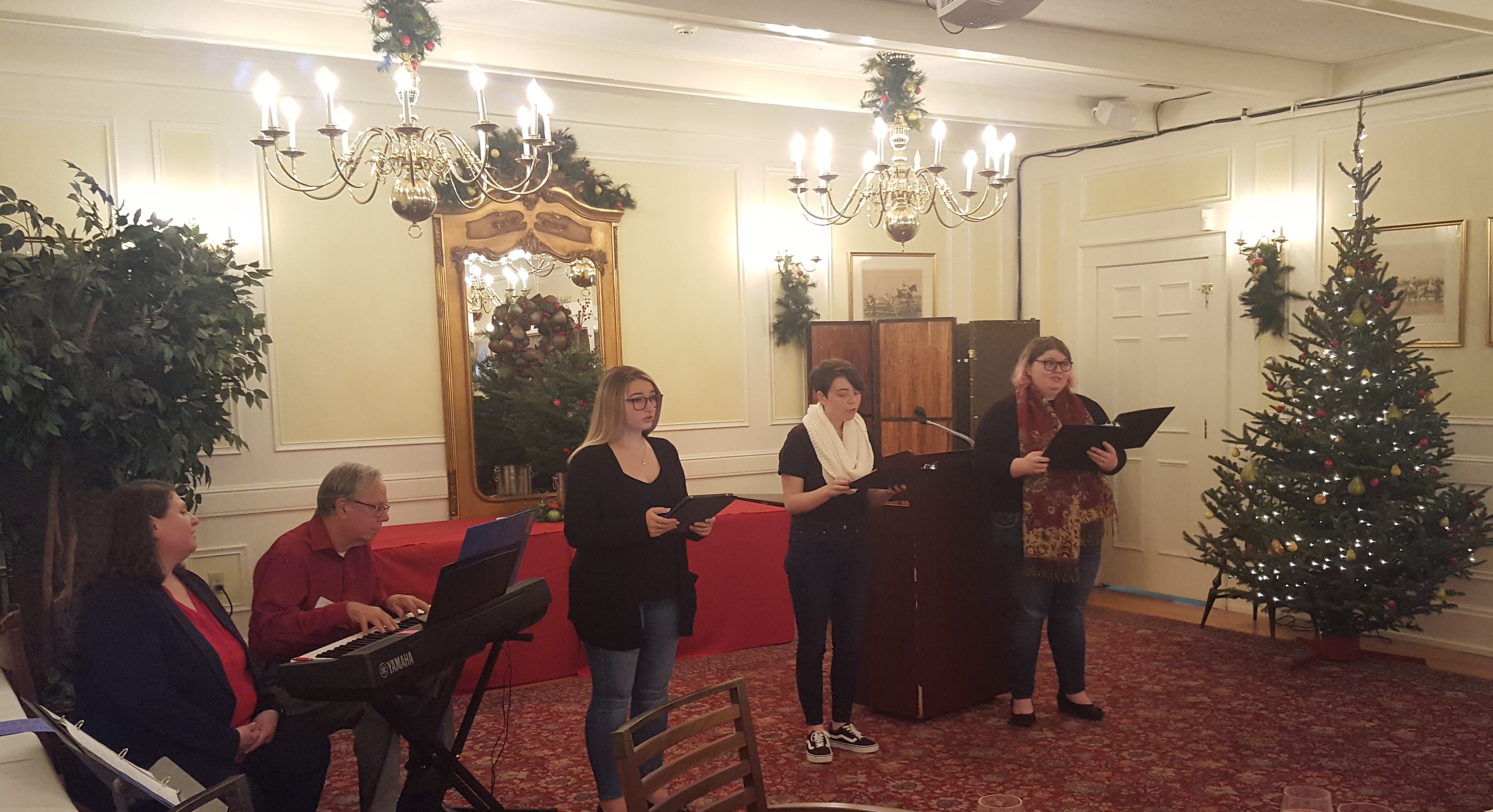 January brought us George Cunningham who spoke about the life and poetry of Scotland's poet laureate Robert Burns in a program entitled "Celebrating Bobby Burns." 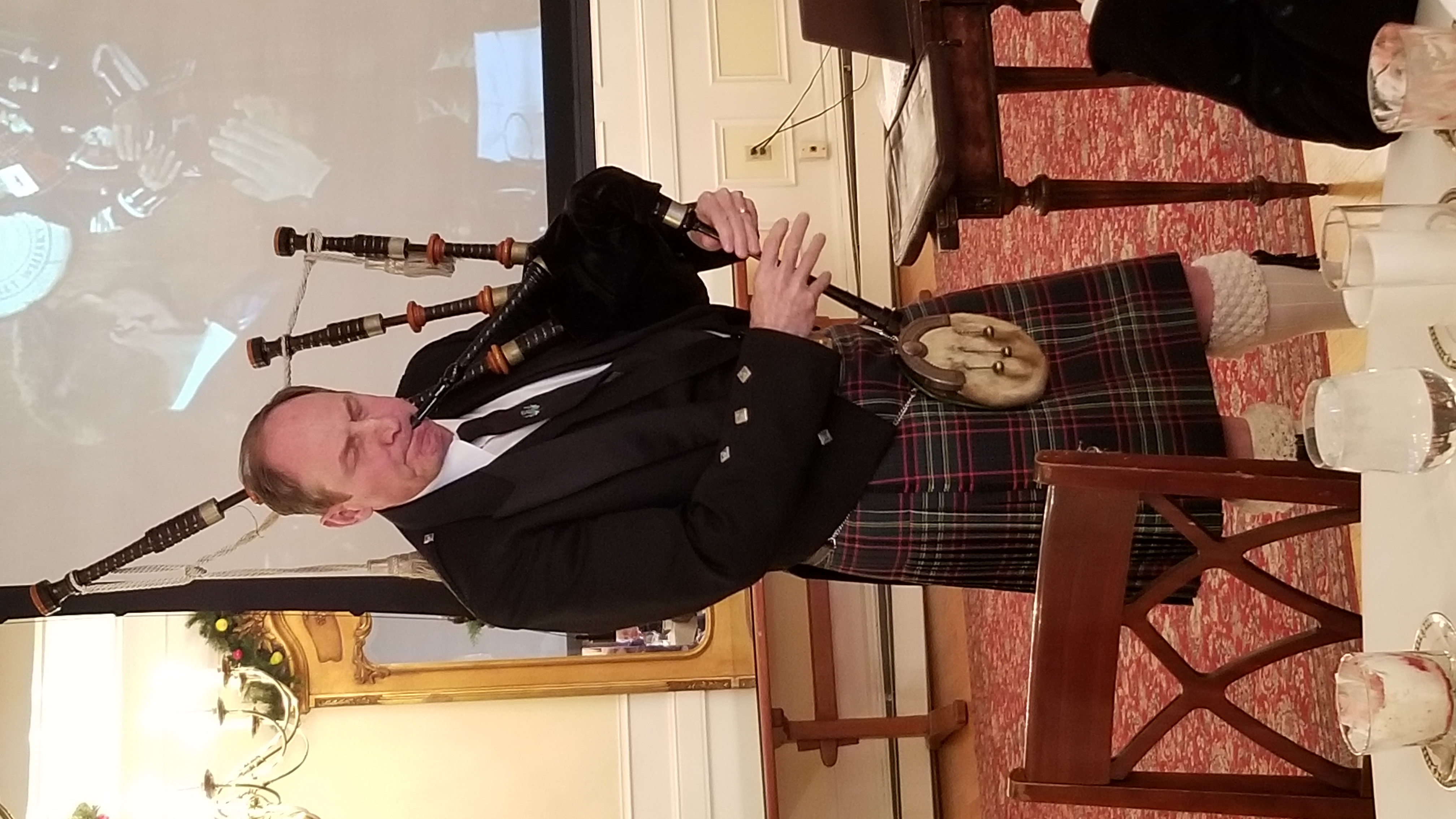 Mr. Cunningham also entertained us with readings of Burns' poetry and with his own performance on the bagpipes.  Mr. Cunningham was introduced by member Shirley Cruikshank. 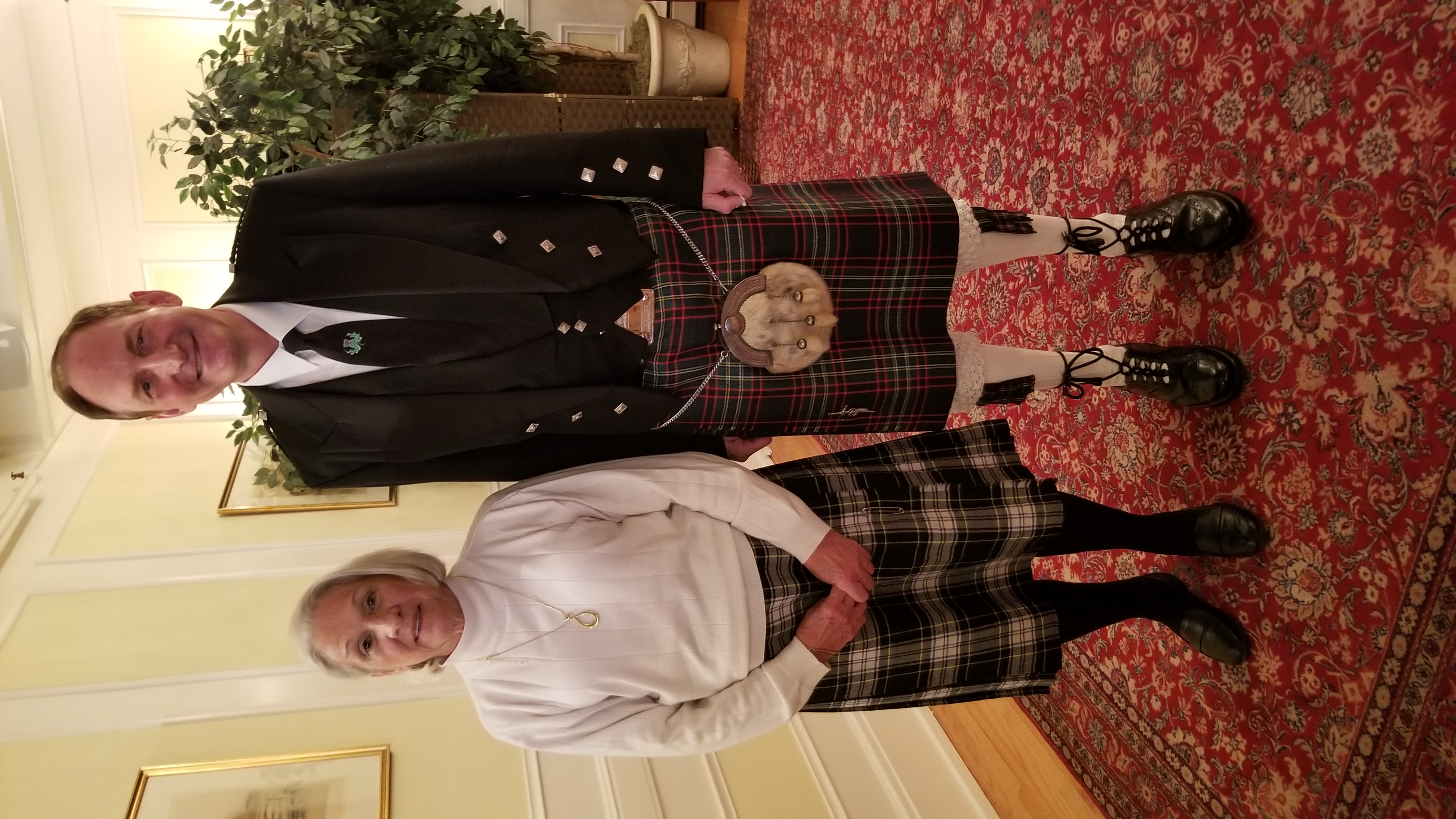 JoAnn Wallace presented our February speaker, Len Fonte, a playwright and theater critic who calls Syracuse home.  He spoke on the topic "Shakespeare and the Stage."  Mr. Fonte has directed over forty productions and was accepted into the 2010 Kennedy Center Playwriting Intensive, a series of rigorous workshops. 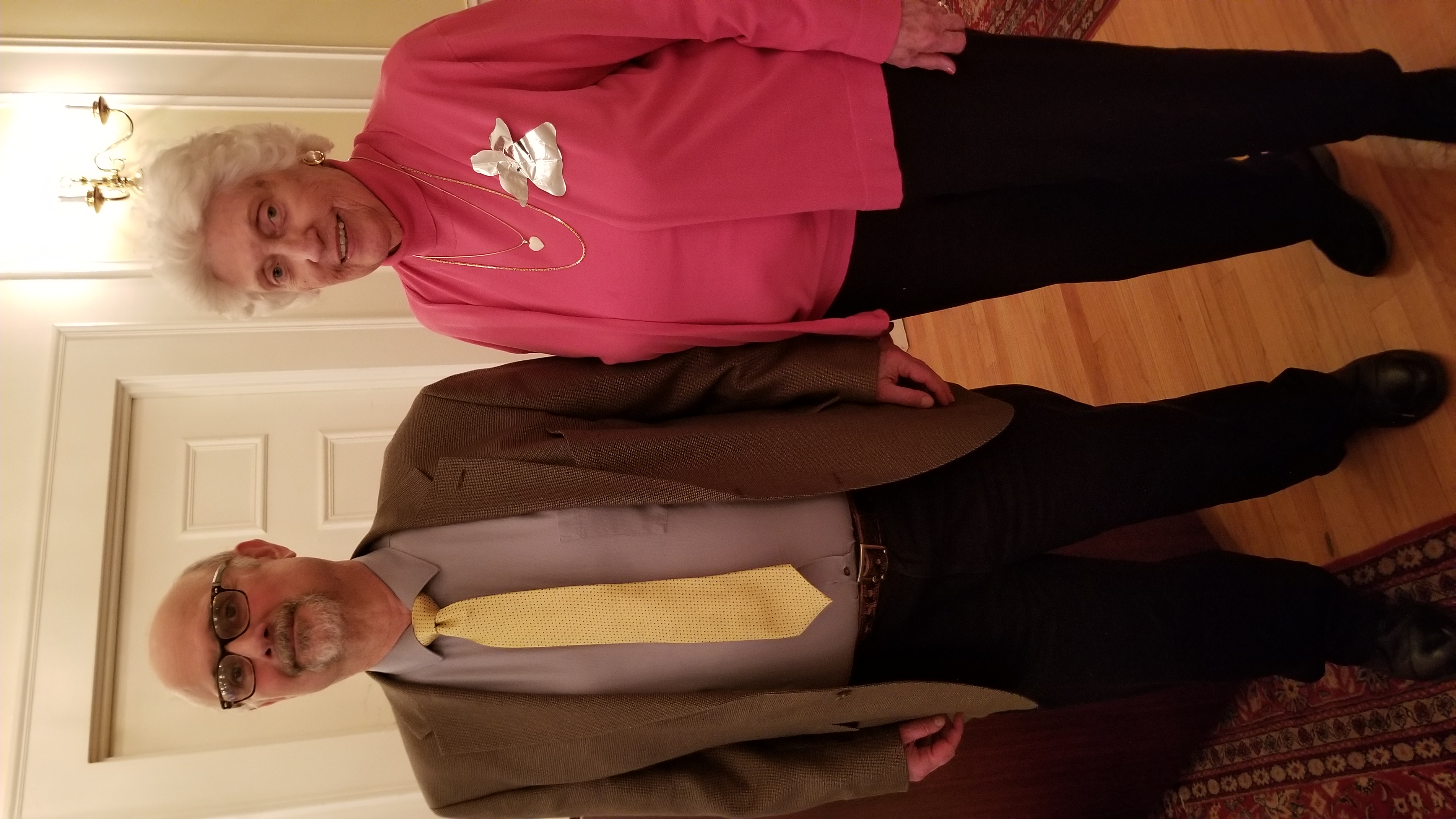 April brought us music and opera performer Colby Thomas.  Ms. Thomas has performed worldwide, starring in several productions, including playing the role of Christine in Hamburg, Germany's, production of "Phantom of the Opera."  She is an expert on American Musical Theater and is presently teaching, performing and directing at SUNY at Oneonta.  She was introduced by member Alice Borning. 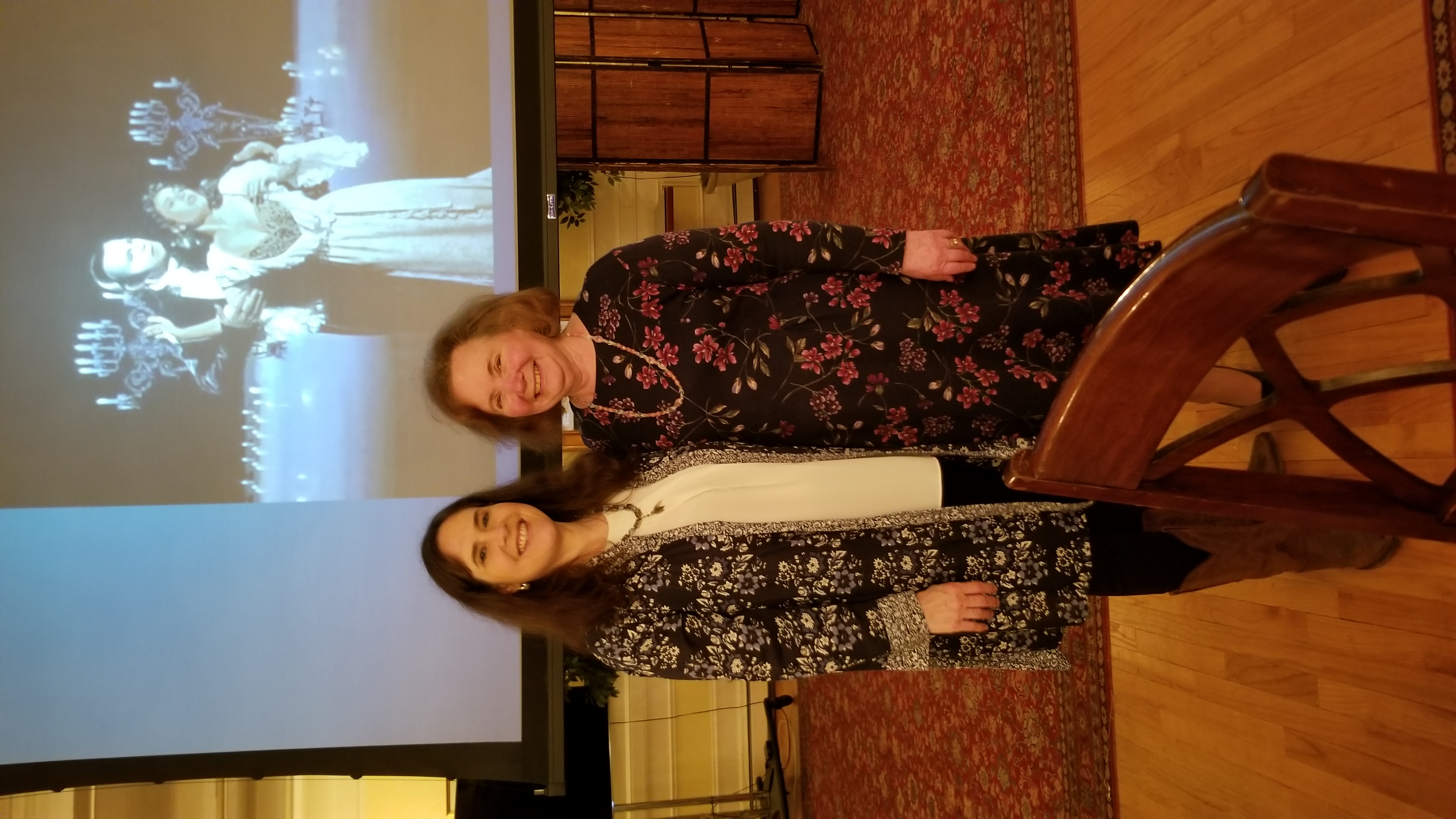 The Syracuse chapter of the English-Speaking Union continued to meet via Zoom through the pandemic but is now back to in-person meetings (with Covid safety precautions in place) with our traditional excellent luncheons, enjoyable social interactions, interesting conversations, and outstanding speakers. 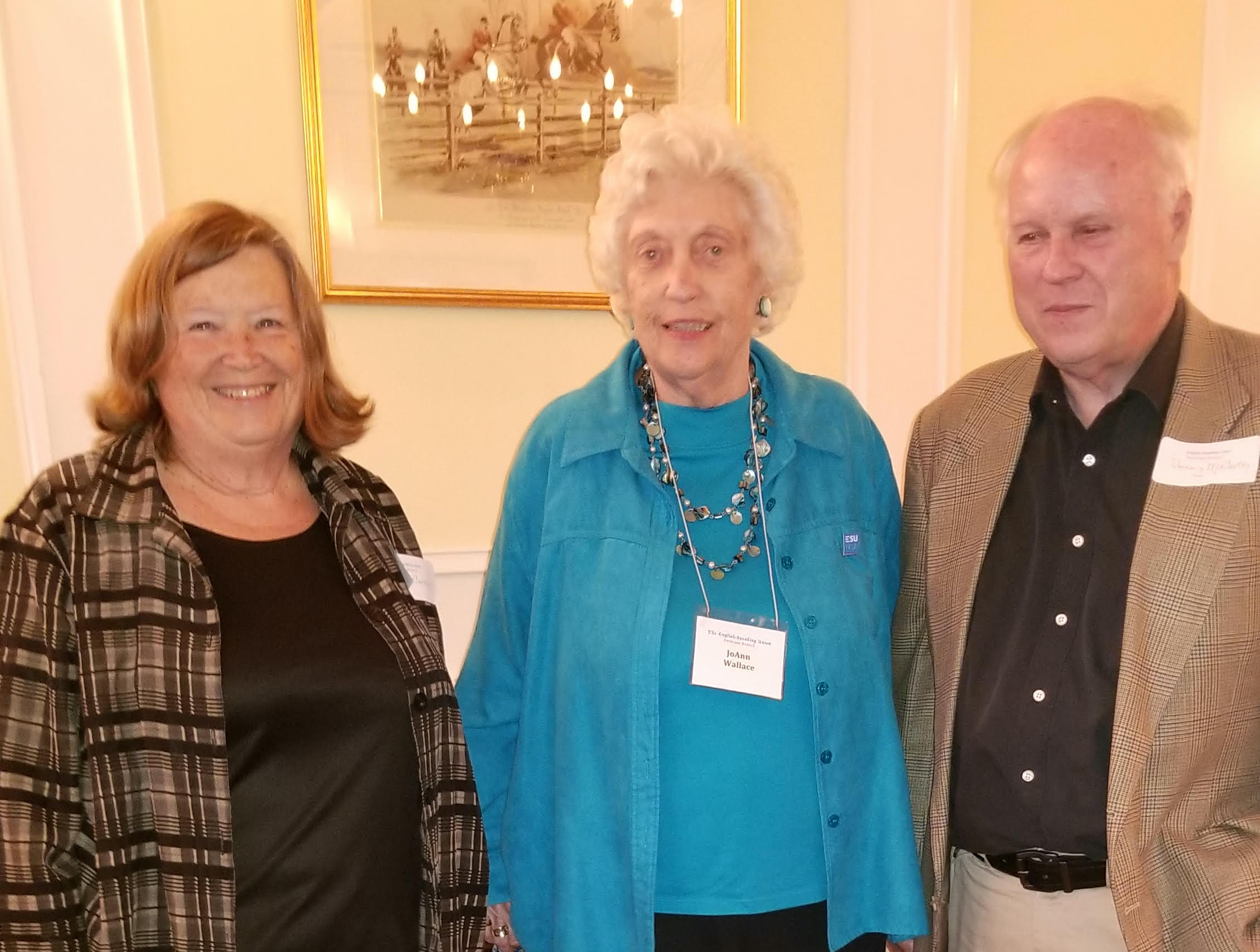 Our October meeting featured Kathi and Dennis McCarthy, the directors of the St. Lawrence River Historical Foundation, who focused on shipwrecks in the waters of the St. Lawrence River and Alexandria Bay. They also described early underwater diving techniques featuring diving helmets and scuba gear, followed by the newest diving gear which enables divers to descend to 300 feet, 100 feet further than scuba divers. Member JoAnn Wallace (center) introduced them. 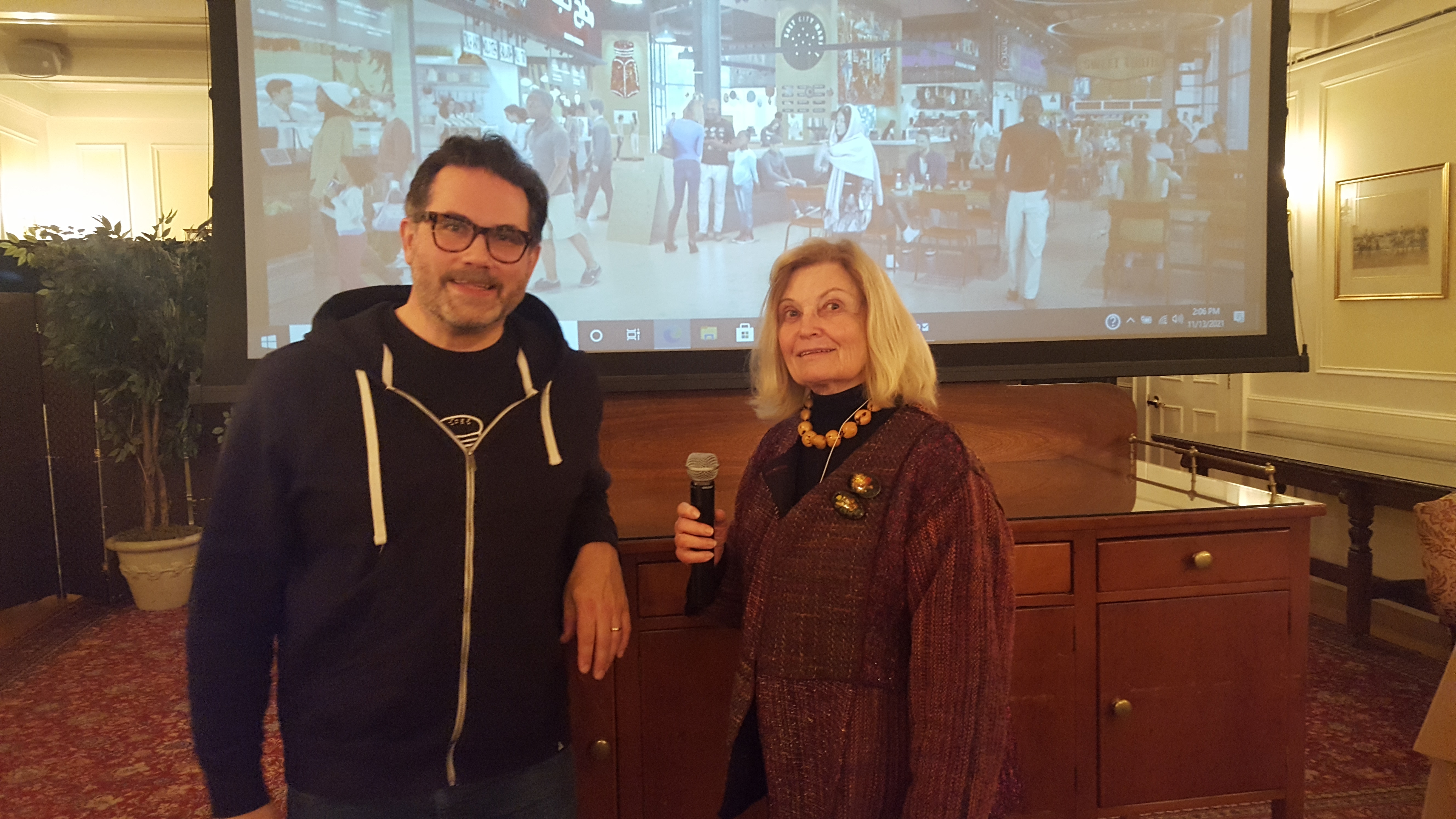 ESU member Marjorie Julian introduced our November speaker, Adam Sudmann, the Market Manager at Salt City Market, the new Food Hall and Public Market in downtown Syracuse that opened in January 2021. Mr. Sudmann was inspired by the diversity of people in Syracuse and their food cultures. He has helped new entrepreneurs begin businesses. So far the Salt City Market features food of Pakistan, Burma, Palestine, Vietnam, Somalia, and, closer to home, Savannah, Georgia.

The Syracuse Chapter of the ESU opened its 2021-22 season with its first in-person gathering in over a year. Our speaker was  Kevin Morgan, who spoke about adult literacy and the ProLiteracy organization's mission to develop and promote adult literacy learning, content programs, and advocacy. 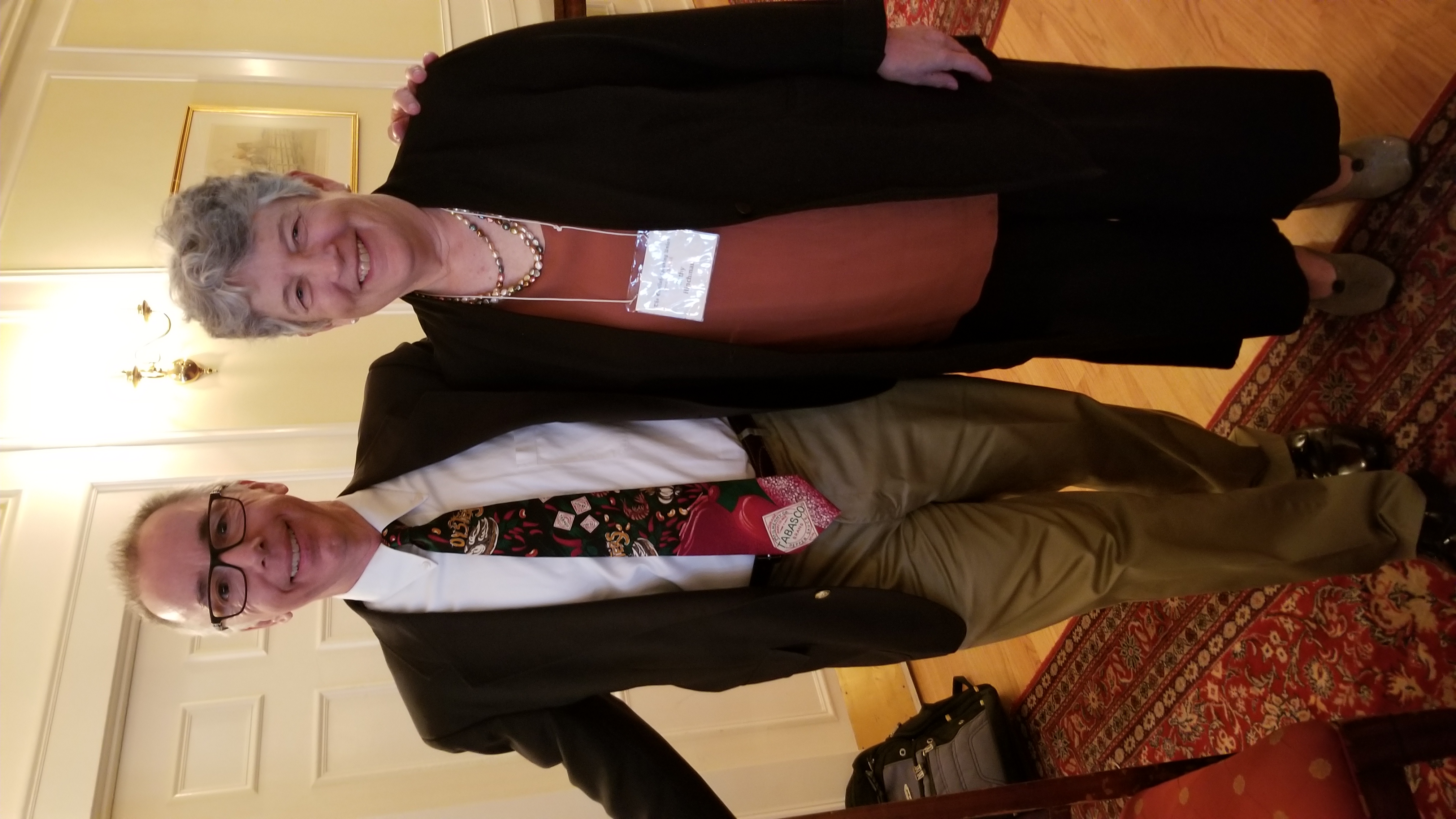 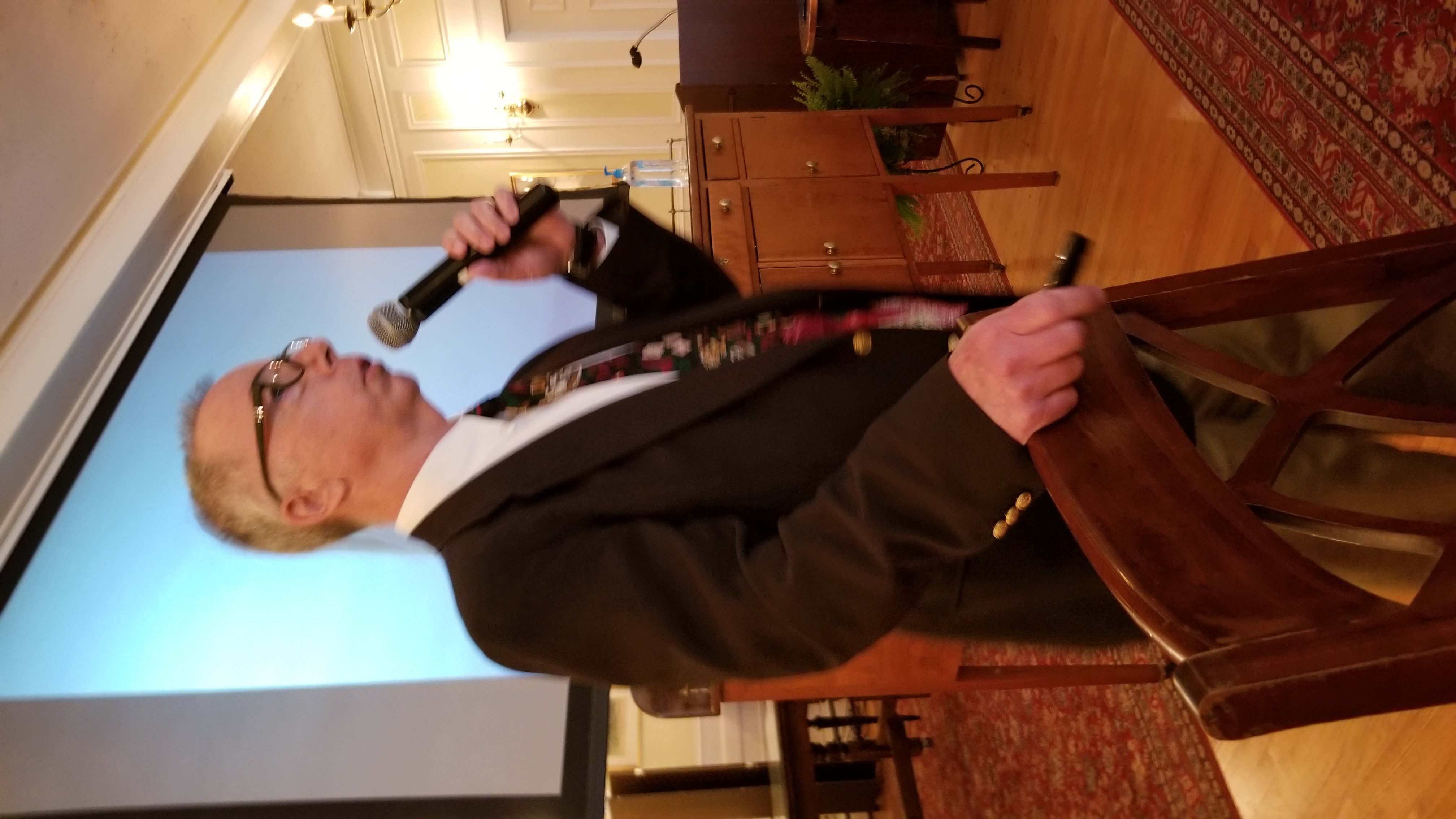