The ESU New York Branch again participated in the  ESU TLab (Teachers Learning Abroad) program this year. It awarded four  scholarships to NY area secondary school teachers to engage in two to three weeks of formal study at either Shakespeare's Globe in London, University of Oxford or University of Edinburgh. We congratulate our 2019 TLab Scholars: Abigail Hope from the Riverdale Kingsbridge Academy, Sammie Smith from the Abraham Joshua Heschel School, Radley Glasser from the Speyer Legacy School, and Heather Lester from the International High School at LaGuardia Community College.

The ESU New York Branch conducted its Shakespeare Competition in the winter, attracting participation from some 50+ high schools in New York.  The semi-finals took place at the ESU House followed by the finals on stage at the Morgan Library and Museum. Jordan Griffin from Talent Unlimited High School  won and then represented the ESU New York Branch in the ESU National Shakespeare Competition at Lincoln Center in April, where he placed among the 10 finalists. Jing Mae Wang from the Bronx High School for Science placed second, while Ndeye Niang from Repertory Company High School for the Arts, also in Manhattan, placed third.

Message from the New York Branch

With the summer of 2019 winding down, we turn our attention back to the ESU New York Branch and what the fall season will bring.  Again, the Branch will offer monthly Mystery Book Cub meetings (see calendar for titles the group will read), and the ESU Players are pulling together a series of staged readings of plays that will continue to engage a diverse group, including current and former ARNIC (Andrew Romay New Immigrant Center) members, with the English language.

In addition to these regularly scheduled members' events, there will be a few lectures as well as a film screening, and a special curated tour of the Treasures from Chatsworth: The Exhibition at Sotheby's.  The Branch is continuing its partnerships with the Art Deco Society of New York, Royal Oak Foundation and Historic Royal Palaces.  And in December, (save the date: December 5, 2019) we will hold our annual Yuletide Party in collaboration with the British Schools and Universities Club. 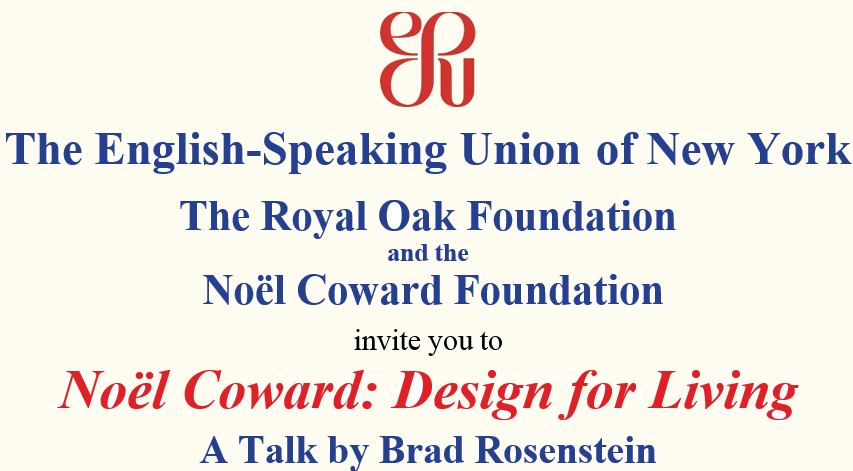 Join us for an engaging illustrated talk on Noël Coward, inspired by the exhibition Coward: Art & Style, which will open at London's Guildhall Art Gallery in July 2020. In Noël Coward: Design for Living, Brad Rosenstein explores the central role of design in Coward's life and work. The pre-eminent British playwright and songwriter, renowned for his verbal wit, was also visually acute, seeking out the finest artists and designers of his time to craft the sets and costumes for his original productions, the décor of his homes, and his iconic personal style. Rosenstein's rich presentation interweaves images, audio, and video with lively and insightful commentary on Coward's collaborations with a gallery of brilliant talents, from designers Cecil Beaton, Oliver Messel, Gladys Calthrop, and Doris Zinkeisen to couturiers Edward Molyneux and Norman Hartnell and decorator Syrie Maugham. The result is a fresh and unique glimpse into Coward's personal and theatrical world. 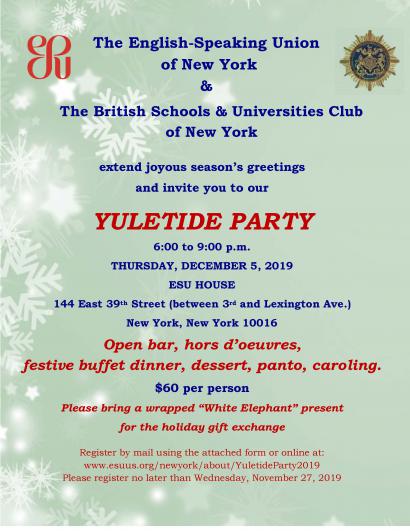 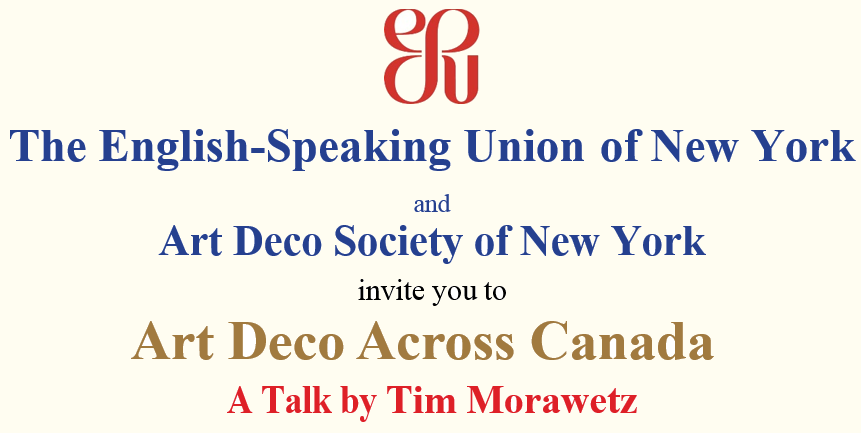 Join The English-Speaking Union and ADSNY for an engaging illustrated talk exploring the Art Deco style in Canada. In this presentation, Tim Morawetz demonstrates how, like Art Deco buildings everywhere, Canada's examples display a rich array of decorative motifs unique to the country's geography, history, and culture. He shows how various types of Deco architecture––ranging from high-profile office towers, city halls and department stores, to apartment buildings, neighborhood movie theaters, private homes, churches––utilize Canadian archetypes such as hockey, beavers, and maple syrup to reflect Canada's identity and history. Morawetz features many structures that boast stunning bas-relief carvings and decorative elements representing uniquely Canadian flora and fauna, industry, and daily life.  This presentation also includes entertaining stories that paint a picture of the legendary entrepreneurs, politicians, and everyday Canadians who made their mark during the interwar era.

A Comedy of Tenors 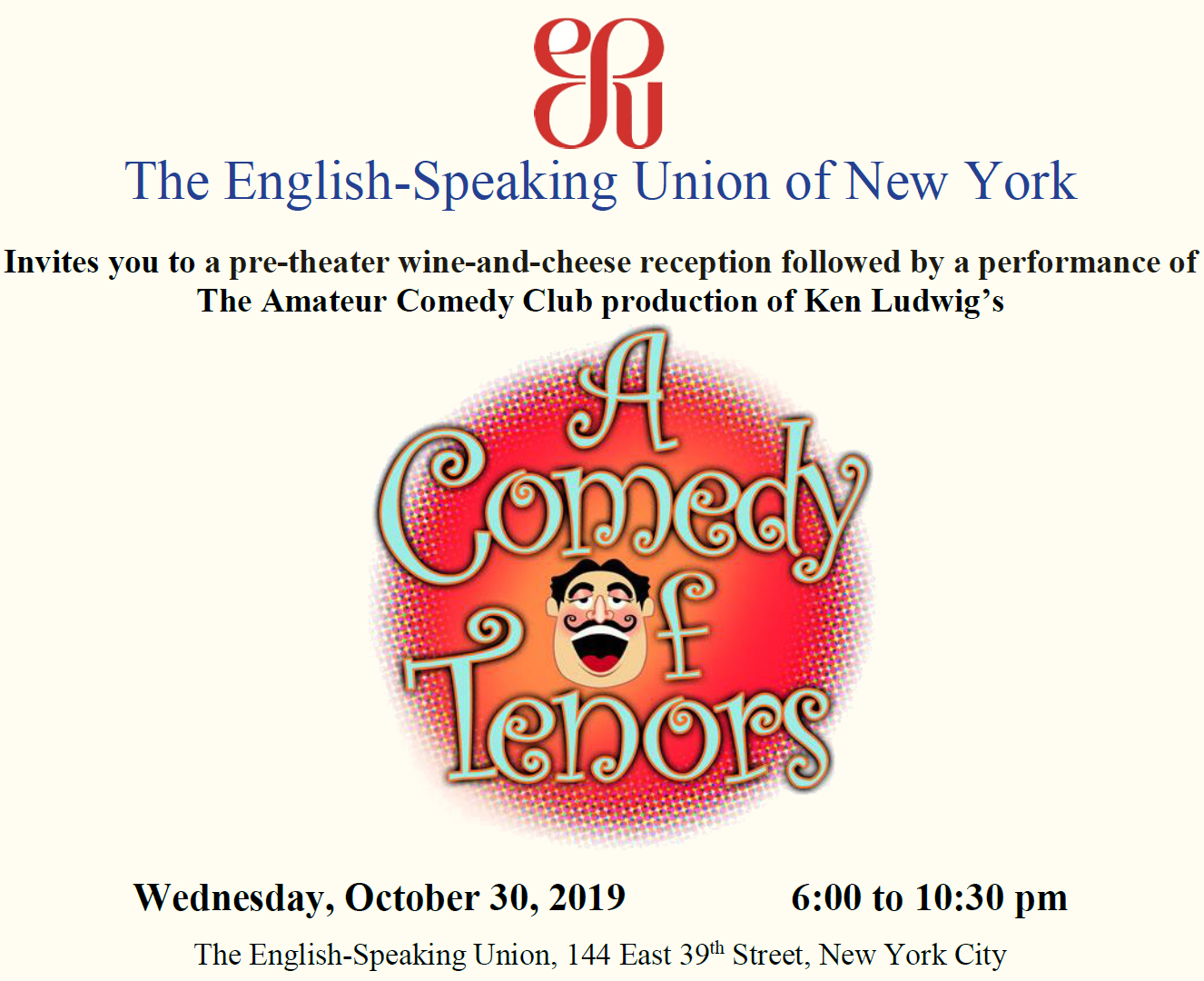 "A Comedy of Tenors" features one hotel suite, four tenors, two wives, three girlfriends, and a soccer stadium filled with screaming fans. What could possibly go wrong? It's 1930s Paris, and the stage is set for the concert of the century—as long as producer Henry Saunders can keep Italian superstar Tito Merelli and his hot-blooded wife, Maria, from causing runaway chaos. Prepare for an uproarious ride, full of mistaken identities, bedroom hijinks, and a madcap night of humor and music.

Reception at 6 pm at the ESU; group procession to the Amateur Comedy Club at 7:15 for an 8 pm curtain.

Register by Monday, October 28 by mail by downloading this form or online here.

No issue in recent memory has consumed the United Kingdom like the move, known colloquially as "Brexit." With yet another deadline fast approaching, there still remains much confusion and speculation about the ramifications of the UK's departure from the European Union. In this riveting and informative illustrated talk, Kim Lane Scheppele reprises and updates her fascinating presentation on Brexit, which she initially delivered in two separate talks for the ESU Princeton Branch. For those who don't fully get all the fuss about Brexit, Scheppele covers the basics and explains the potential repercussions for the United Kingdom. How does a "soft" Brexit differ from a "hard' Brexit? Explaining these and myriad other Brexit-centric terms and concepts, she clearly illustrates the potential impact of this "divorce" on all aspects of the British economy as well as on the UK's relationship with Europe and the world. More importantly, her presentation includes updates reflecting recent developments, including the ascension of Boris Johnson as UK prime minister, who has held out the threat of a "no deal" Brexit on October 31, 2019, which will create a complete break. She outlines anticipated outcomes and impacts of the withdrawal of the UK from the EU clearly and succinctly. Boris Johnson has claimed that "Do or Die, Come What May" Brexit will happen by October 31. Can he keep his pledge?