Officers & Board of Directors

Welcome from the President

Welcome to our refreshed website! We have the entire year's schedule in brief to the left, the updated officer and board members to the right, and details about our upcoming program (to be changed each month) just below this note. There is also a picture album from out last event of the 2021/22 year, The Queen's Birthday Tea and Annual Meeting, in the photo section.

You can contact us by email, in writing to our post office box, or find us on Facebook by clicking on the icon at the bottom right. 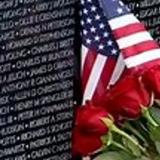 Presented by George Halyak, a long-time member of the English-Speaking Union, who was selected as one of the "52 Faces in Craven County," and received a lifetime Achievement Award from Craven County Veterans Council in 2020.

George was the chairman of "Bring the Wall to New Bern" committee. A U.S. Navy veteran, George made what he called a "simple phone call" in 2018, then spent two and a half years raising over $50,000.00, forming a 15-member committee, and recruiting over 200 volunteers. Included in his presentation is a 15-minute video which is the work of the Coastal Photo Club which captured over 1600 images of every aspect of the April, 2021 event and set them to a memorable and moving music score.

Also presenting at this event is Jane Knowles. Jane is a New Bern native, and veteran U.S. Army Captain and Nurse stationed at the 85th evacuation hospital in Phu Bai Vietnam in 1969. She was a keynote speaker at the "Wall that Heals" exhibit which came to New Bern in 2021. Jane will offer a poignant and touching memoir of the local young New Bern boys who became men as they climbed off the plane which took them to southeast Asia and a war from which many would not return, and for those who did, they would never be the same.

October 16, Sunday 5 p.m.
Hix House, corner of Johnson and Edgerton
Let's Share a Laugh. Drinks and Nibbles followed by words of "wisdom" from famous humorists from both sides of the pond. (Members and Guests)

December 18, Sunday 3 p.m.
Atkinson House, 501 New Street
Open House with cookies from around the world and Treasure Hunt among more than 12 creches collected from Atkinson's work and travel around the world. (Members and Guests)

*April TBA
New Bern Resolves of 1774
Members of the Sons of the American Revolution will share how this meeting to address taxation without representation and a call to arms took place at the New Bern Courthouse, and how it is celebrated here. (OTP)

May 21, Sunday at 5:30 p.m.
Peterson Porch, 516 Middle Street
People Who Became Food Dinner with a menu consisting of food that was named by and for people. (Members and Guests)