Leslie Newman, our SSE alumni ESU Centennial highlight for this week, experienced "Swinging London" at Francis Holland School, an all-girls school at the time, in 1966-67. She graduated from NYU after her year with SSE and now lives in Illinois. In New York City, she worked with non-profits where she grew to love raising money for good causes. In Illinois, she has now worked with Lurie Children's Hospital on the board for almost 40 years, including as President of the Founders' Board. Leslie says that "because of the self-confidence and assurance I gained through the SSE program, that enabled me to accomplish all of these efforts."

In the SSE program, Leslie made lifelong connections with families, including one family with whom she has met up with "every year since 1967 … We have traveled all over England, Wales, Scotland and France and the US, we have been to all of our childrens' weddings, and I am Godmother to their granddaughter." Leslie enjoyed her British Constitution class the most, but found that the academics were not as rigorous as she expected, since she was one of the oldest at the school. The friendships she made in the SSE program with her classmates helped her to become more outgoing and to learn about diverse perspectives. She says, "We had a very small sixth form – about nine people … but it was very diverse which was incredible. There were girls from Wales, South Africa, Italy, and Canada, and I learned a lot from them." Leslie advises future scholars, "to embrace the experience and not to cling to thinking that the American way of doing things is the best. Being judgmental is the way to close your mind to all of the wonderful possibilities that you are being offered. Some of the students my year were frightened that they would get a 'British Accent;' [but] I couldn't wait!" 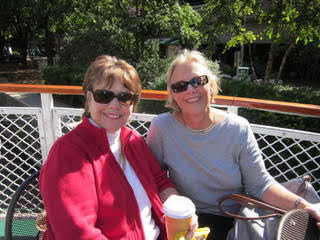 Leslie also has a great appreciation for theater, which was nurtured while she attended school in London, where she went to see plays every week. Leslie has maintained friendships from her year in the SSE program and says that "the many friendships I made during that year speak to the value of the program."

Thank you to Leslie Newman for sharing your story with us at the ESU. We are inspired by your experiences and look forward to hearing more from our alumni!