The ESU Middle School Debate Leagues capped off a successful third year with a Public Debate in New York City and a National Championship Tournament at Claremont McKenna College.

The English-Speaking Union Middle School Debate Program, a partnership with Claremont McKenna College, teaches the fundamentals of argumentation and debate to students in grades 5-8. Established in 2011, the program now includes two ESU-sponsored leagues in New York and one in New Jersey.

On May 21st, teams from the New York and Big Apple Debate Leagues met at The Morgan Library & Museum to discuss the proposition, "In the case of the United States government, transparency is more important than security."

"I think one of the biggest benefits [of the debate program] is the ability for kids of different social, religious and economic backgrounds to come together for the purpose of dialog," said Maria Williams, an educator in New York City. "Students from across the city have grown tremendously in their respect and understanding of one another." 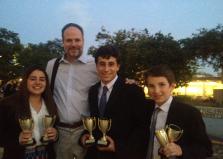 The Hackley School team placed 2nd overall, while their league-mates from the Hunter College Campus School placed 4th.  The team from the British International School of New York won two debates, on the propositions "U.S. universities should divest their fossil fuel holdings" and "Ban tipping!".

Coach and NYDL President Stephen Fitzpatrick was proud of the impressive showing,  noting that ESU teams won several of the top speaker awards, out of a total of 250 students. According to Michael C., "The competitive spirit of the event is a good life lesson for all middle schoolers. The thrill is not the triumph, but taking part in the struggle".  Indeed, the young orators tackled such diverse topics as "The U. S. should pardon Edward Snowden" and "Stand your ground laws do more good than harm" with enthusiasm and skill. Madelyn M. reflected, "The experience of Nationals was great, because debating against the best schools has taught me several tips and tricks to improve my speaking skills."

Return to In the News